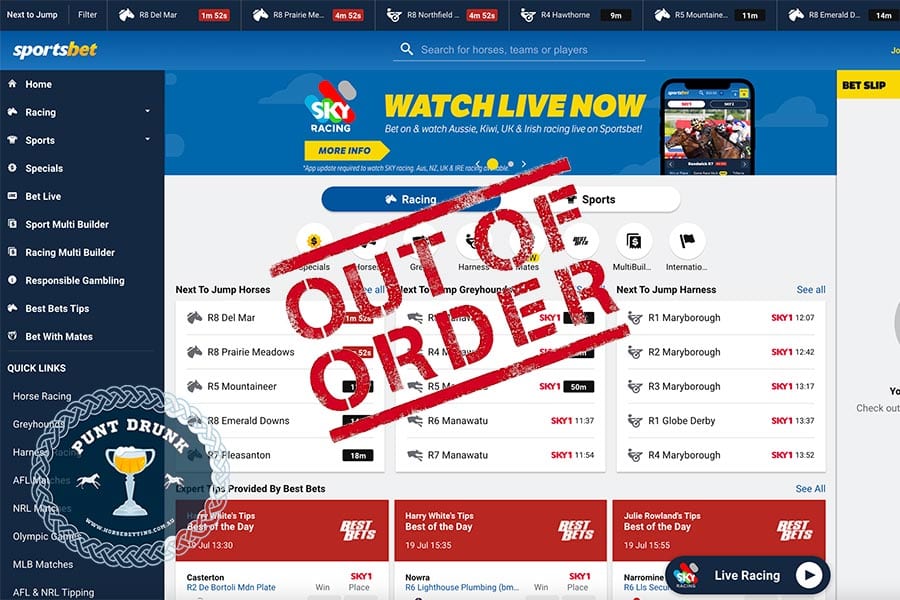 What a weekend that was! From Sportsbet going down for close to five hours, to a jaw-dropping performance at Flemington, and a jumper on the rise taking out the Mosstrooper at Pakenham, the Punt Drunk team takes a look back at big moments from the last few days in the racing industry.

Sportsbet let down an entire nation of punting degenerates on Saturday afternoon when its website crashed around 5pm. It led to an absolute uproar on Twitter with plenty of punters taking aim at the bookmaker’s social media team, who gave zero explanation as to why the popular betting site was down. It gave all of us here at Punt Drunk horrific flashbacks to VRC Oaks Day last year when a “faulty air-con” cause the TAB servers to go down on one of the most important days on the racing calendar. Despite the app coming back up at 9:30pm, plenty of punters were left wanting answers as they couldn’t get on the favourite in the last at Belmont or place their same-game multis for the footy. Sportsbet attempted to by compensating their users, but it didn’t stop the outrage on social media – especially from those in lockdown in Sydney and Melbourne.

I’m Thunderstruck lives up to his name at Flemington

The way the Mick Price & Michael Kent Jr-trained I’m Thunderstruck won at Flemington on Saturday left onlookers with their jaws on the floor. Jamie Kah gave the three-year-old son of Shocking a perfect steer in the second race and put four lengths on his closest rival, Tuvalu, back in second place. Kent did not offer much in terms of what is next for the up-and-coming miler, but surely a crack at some of the Group races throughout the Melbourne Spring Carnival is firmly on the agenda.

Social Element is the new star chaser of the country!

The Mosstrooper steeplechase is a time-honoured event on the jumps racing scene, and it was a horse on the rise, Social Element, who took out the featured event at Pakenham on Sunday afternoon. The Gai Waterhouse & Adrian Bott-trained on of Savabeel backed up his 30-length victory at Warrnambool on July 4 with a comfortable win, making it three in a row over the sticks. Having beat home 2020 Grand Annual Steeplchase winner Ablaze by a big margin, all thoughts went straight to Warrnambool May Racing Carnival next year.