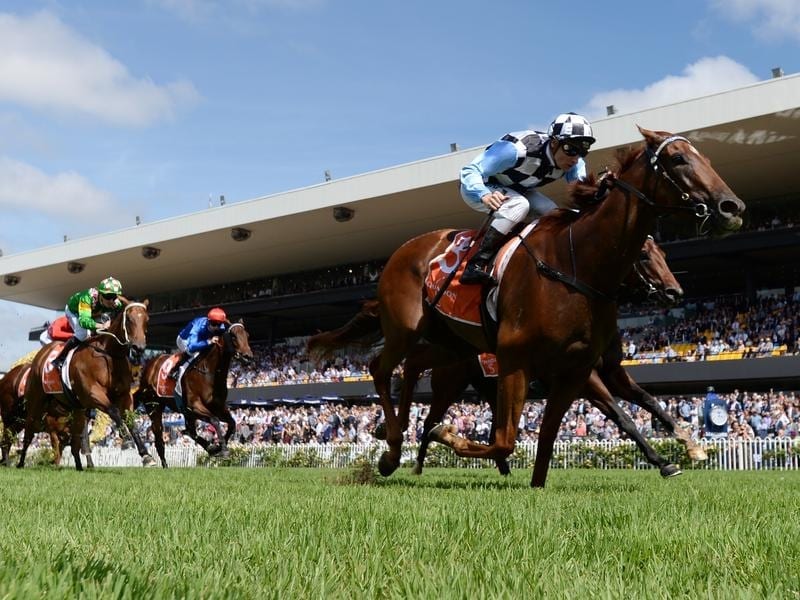 I Am Excited can give trainer David Pfieffer his first Group One win in the Gakaxy at Rosehill.

David Pfieffer is hoping a predicted hot tempo eventuates in the Galaxy as he chases a maiden Group One win with I Am Excited on one of Sydney’s biggest race days of the year.

The Warwick Farm trainer has only had a handful of elite runners and he is thrilled to be part of a program that boasts an array of stars.

“You’ve got the three premium horses of Australia at the moment racing on one day with Redzel, The Autumn Sun and Winx,” Pfieffer said.

“Along with the Golden Slipper it’s one of the best race days in Australia, in the world.”

Pfieffer’s day will be even better if the breaks go the way of I Am Excited in the Galaxy.

On paper, there is speed to burn early with Nature Strip, Ball Of Muscle and Jungle Edge all natural frontrunners.

While new trainer Chris Waller attempted to have Nature Strip ridden more conservatively in a recent barrier trial, the horse’s awkward draw of 10 and tendency to over-race might give the stable little choice but to let him stride forward.

And that is good news for Pfieffer whose backmarker I Am Excited will relish a quick tempo.

“The race looks like it will pan out really well for her,” Pfieffer said.

“There’s plenty of speed up front and she loves a hot speed race.”

A Group Two winner at Flemington in the spring, I Am Excited resumed with a third to Alassio in the Triscay Stakes last month.

The four-year-old’s statistics augur well for the Galaxy – she performs well second-up, she has won two of three starts at Rosehill and is proven on soft tracks.

I Am Excited gets into Saturday’s race on the minimum 51kg and will bid to add to the exceptional recent record of mares who have won three of the past four editions of the Group One sprint.

Pfieffer will also saddle up Prophet’s Thumb in the Darby Munro Stakes, a race won a year ago by I Am Excited.

Prophet’s Thumb backed up an eye-catching first-up performance with a strong last-start win in the Listed Fireball at Randwick on March 9.

Pfieffer believes the filly’s best racing is ahead of her and says she is still learning her trade but has the natural talent to give Saturday’s race a shake.

“We haven’t seen the best of her yet, she’s only going to keep getting better,” Pfieffer said.

“Her work has been outstanding and I think she’ll get through the wet.”