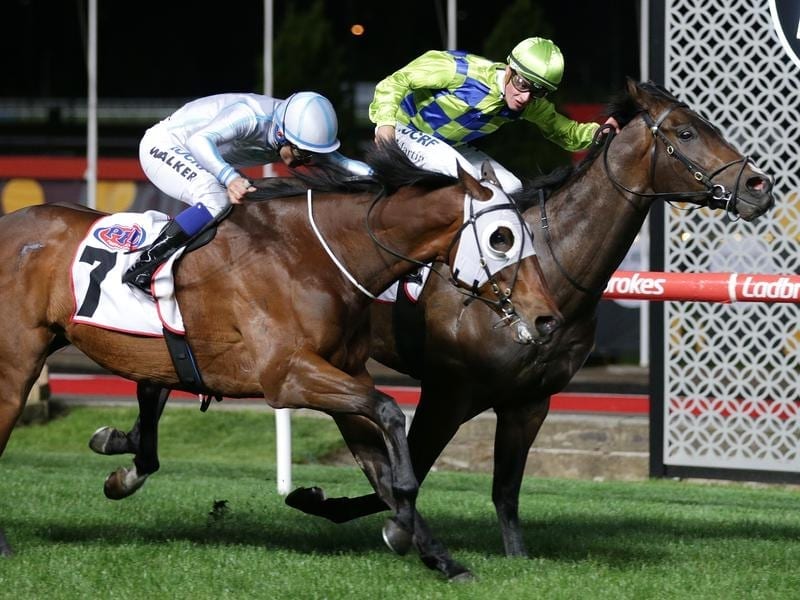 The Jerome Hunter-trained Our Luca (r) will be out to post a hat-trick at Moonee Valley.

Trainer Jerome Hunter’s horses have an affinity with Moonee Valley he hopes will carry Our Luca to a winning hat-trick at the city circuit.

Our Luca and stablemate Angry Gee contest Saturday’s Independent Turf Services Handicap while he has Belwazi lining up in the Spendthrift Australia Handicap.

He was to start Bianconi Magic in the Santa’s Workshop @ The Valley Handicap, but elected to run the gelding at Cranbourne on Friday night.

The Mornington-based Hunter says he has a number of natural speed horses suited to The Valley.

“Maybe if those similar races were available at Caulfield I might go all right there,” Hunter said.

Our Luca has won four of his past five starts, the two most recent at The Valley.

He settled off the speed over 955m when successful on November 2 then stepped up to 1200m to lead throughout two weeks later.

Hunter admits tackling open company for the first time is a concern but is heartened by the gelding’s weight drop on his latest victory.

“Fingers crossed he gets the hat-trick” Hunter said.

“After the claim he comes down to 52 kilos so he’ll be hard to run down.”

“He just held on last start but he did put a gap on them coming around the home turn and it was in the last 50 metres that they were grabbing him.

“It doesn’t look like it will be a fast-run race and most of the favourites are backmarkers so hopefully we’ll have a head-start on them.

“Hopefully he can be rated in front, pinch a few lengths on them around the turn and then they’ll have to run him down.”

Angry Gee is a $19 chance and Hunter believes he will need another run or two before striking form after one run from a spell.

“It’s a very open race and if she’s improved from her last preparation I think she’ll be right in the finish,” he said.