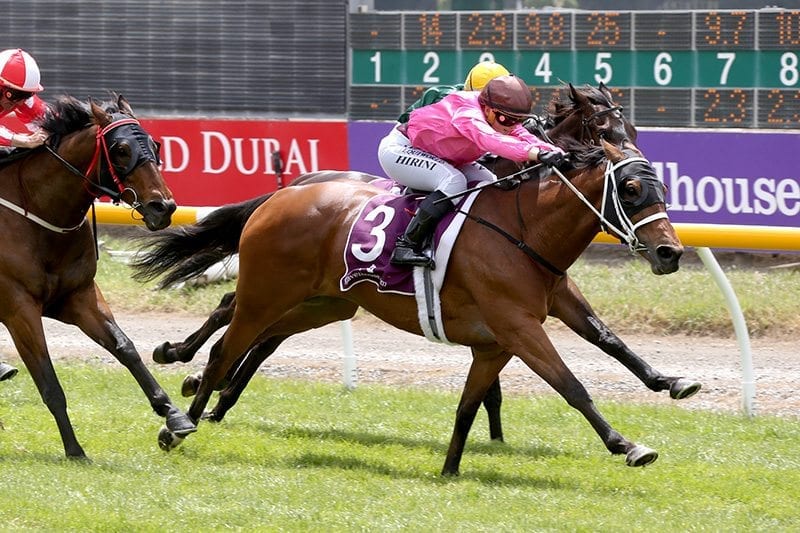 Genuine mare Heni is heading toward a Group One date, but which path she takes to get there has yet to be decided.

The daughter of Towkay is being prepared for the step up to a mile in the Fiber Fresh New Zealand Thoroughbred Breeders’ Stakes (1600m) and Mike Breslin is mulling over his lead-up race options.

“The Te Aroha race is her target and the original plan was to run her in the Cuddle Stakes at Trentham on Saturday to give her a go over a mile,” the Awapuni trainer said.

However, Heni’s last-start fourth at Hastings over 1400m prompted a rethink.

“She wasn’t supposed to be in front, so we could bring her back to 1200m in the Lightning on Saturday and ride her cold, the point is to get her to relax.

“I’ll probably nominate her for both races and make the call after that. She could then run here over 1400m on Sires’ Produce day before Te Aroha, she’s always raced well on a seven-day back-up.”

Heni has won 11 of her 38 starts, including the Gr.3 Canterbury Breeders’ Stakes (1400m), and her consistency is highlighted by a further 12 placings.

Meanwhile, stablemate Wafer will run in the Gr.3 Wentwood Grange Cuddle Stakes (1600m) if she makes the field.

“She showed a lot of talent as a three-year-old and then she went through a funny stage when she was going a bit hard and her breathing wasn’t right, but she’s come up a lot better this time,” Breslin said.

The winner of the Listed Gore Guineas (1335m) in 2016, Wafer has finished strongly to be in the money in all three appearances this preparation including a most recent second at Matamata.

“Her last performance was very good and realistically she could have won all three starts,” Breslin said.