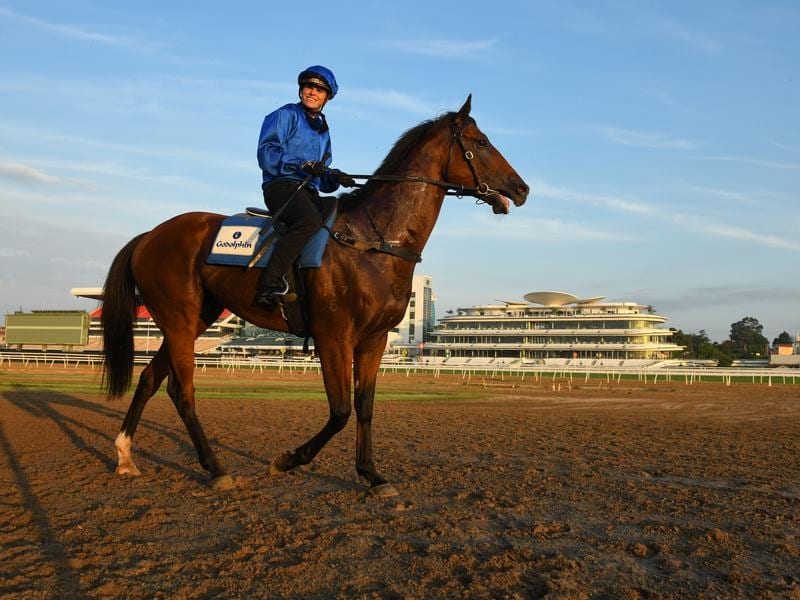 Craig Williams has tested his Oakleigh Plate mount Bivouac in a jump-out at Flemington.

Trainer James Cummings is confident Bivouac is on target for a first-up tilt at the Oakleigh Plate after continuing his preparations in a Flemington jump-out.

This season’s Golden Rose winner, three-year-old Bivouac settled back in his 800m-heat on Friday and worked home well under Craig Williams.

“I was delighted with him,” Cummings said.

“The Oakleigh Plate is his first-up target and we’ll be very interested to see what nominates and what weight he gets.

“He stormed through the line well this morning and Craig felt he had plenty in hand.

“He’s a lovely horse and it’s good to get through that trial without any concerns and we’re proceeding as per the plan.”

Williams is booked to ride in Saturday week’s Group One Oakleigh Plate (1100m) at Caulfield, Bivouac’s first start since his second placing to Exceedance in the Group One Coolmore Stud Stakes last spring.

“I’ve got a good idea about where I want to see him go after the Oakleigh Plate but he’s the sort of horse now that we don’t have to run him all the time,” Cummings said.

“We’ll just pick our mark and once we’re very comfortable in what he’s shown us and where we head to next is when we’ll outline the next step.

“But his first-up target is a very important one because it’s a Group One and it gives him an opportunity that we really need to take.”

Exceedance also made an appearance at the jump-outs in an earlier heat as he builds towards his race return.