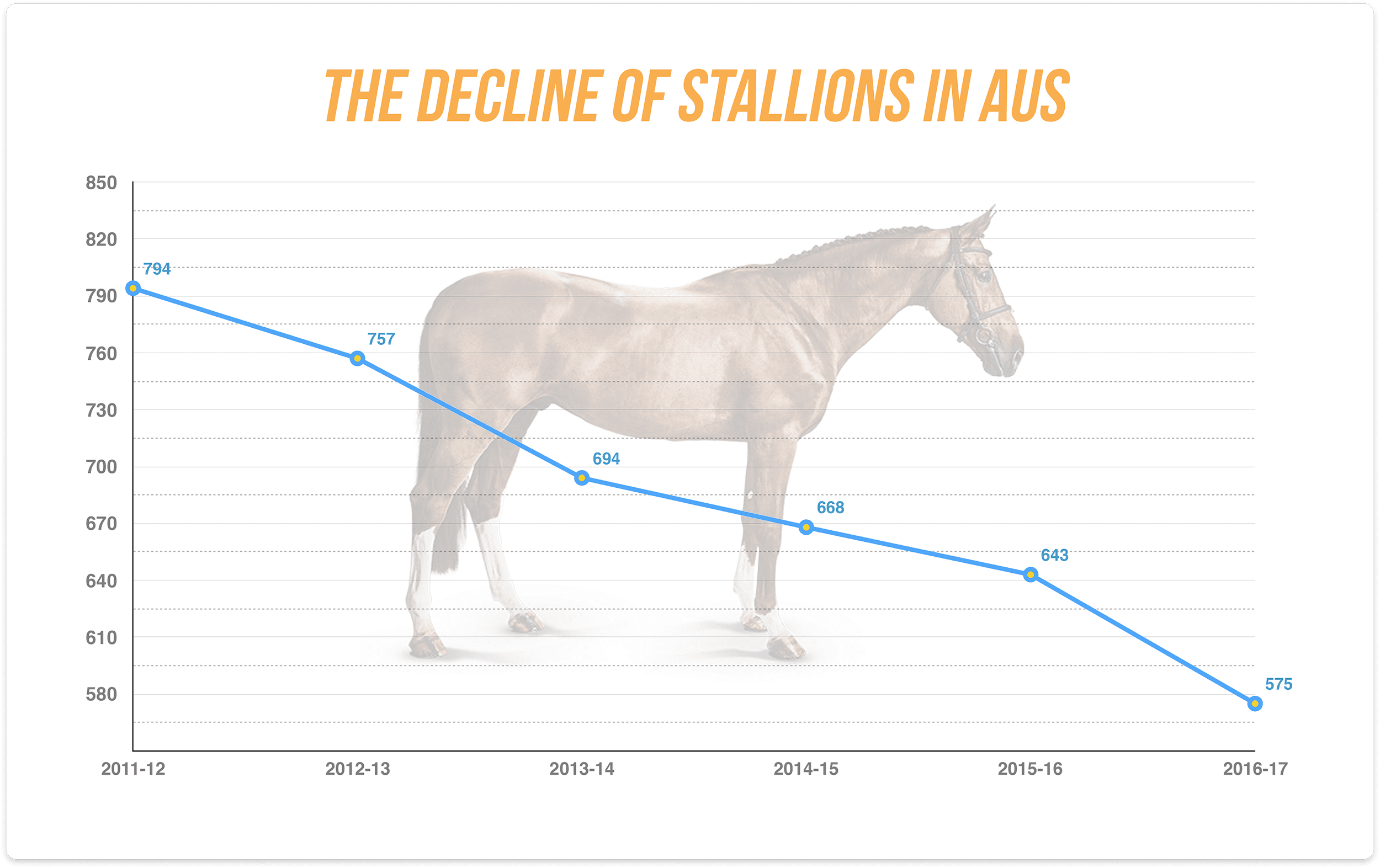 NUMBERS released this week in the Racing Australia Annual Report show that the total number of stallions in the country has been dwindling over the last six years, with the overall number dropping below 600 for the first-time this decade.

The number of shuttle stallions – like US superstar American Pharaoh, which stood at Coolmore this year – has remained consistent over the six-year time period, but the overall number has dropped down significantly.

The diminishing numbers could be considered surprising, given the racing industry’s propensity to retire colts as early as possible to maximise their dollar value.

Mick Price-trained group 1 stablemates Extreme Choice and Flying Artie were shipped off to stud ostensibly before their time.

The decrease in stallions has done little to impact the total mares covered, which has remained fairly consistent across the six years of recorded statistics.

The total mares covered numbers have held steady between 19,000-22,000 in the six year period, and the numbers of mares covered by shuttles has remained around the 16 percent mark consistently in the same time frame.

Sniztel is the sire king

Unsurprisingly, stallion Snitzel was the number one sire across almost every meaningful statistic in Australian racing.

Of those wins, 31 of those were listed or group races, producing over $16 million in prizemoney. The number one earner for the Snitzel was Redzel, which won $962,000.

Redzel is almost certain to top the charts again for Snitzel in the 2017/18 after claiming the $12 million inagurial running of The Everest and the Group 1 Darley Classic.

The sire has also dominated the juvenile season.

The number one earner for Snitzel in that period was rising star Invader, which took out the Group 1 Sires’ Produce Stakes before placing second exactly two weeks later in the Champagne Stakes.

One school of thought would be the success of a select few would diminish the overall number of sires that are currently standing around Australia.

Snitzel is consistently-producing the best sprinters in the country – the most lucrative form of racing in Australia – and while the horse is delivering results, why would anyone want to deviate?

The old saying that “success breeds success” is no more apparent then in the thoroughbred racing industry – once you make a name for yourself as a strong sire, chances are you are going to make a boat-load of cash.

Does that mean that the retiring three-year-old’s should stay in the racing game for longer? Not necessarily, and the risk of injury and a downturn in form will always be a deterrent, but while sires like Snitzel are dominating the game it makes it harder to justify sending these horses to stud.

It my be idealistic, but if Snitzel’s stallion dominance helps keep our best young colts out on the race track, then we will not be complaining.