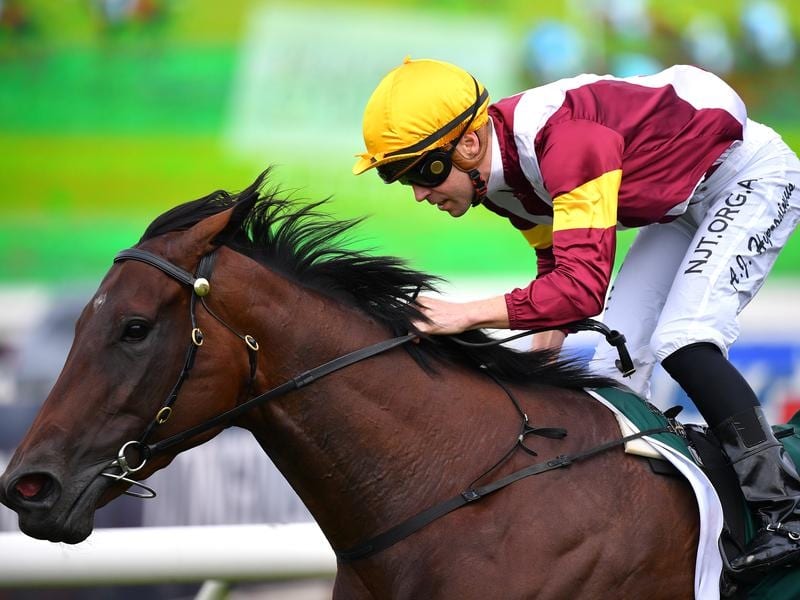 Shout The Bar has defied all to win the Group One Vinery Stud Stakes over 2000m at Rosehill.

As a kid, Adam Hyeronimus would watch and marvel as Gai Waterhouse dominated Sydney’s biggest races.

At Rosehill on Saturday, the hard-working jockey teamed up with the trainer to land his first Group One win aboard Shout The Bar in the Vinery Stud Stakes (2000m).

The race was billed as a match-up between Funstar and Probabeel, who have finished one-two in the shorter fillies events this autumn.

But after being flushed wide early, Funstar finished a battling fourth while Probabeel charged late but could not reel in Shout The Bar.

Hyeronimus had a sniff of an elite win a week ago when second aboard Prince Fawaz in the Rosehill Guineas and was thrilled to finally break his duck.

“Growing up as a kid I used to watch the races on Saturday and Gai used to just dominate the two-year-old races.

“That’s what I grew up with and to end up being her apprentice and finish my apprenticeship there, and to continue riding on for her and get my first Group One winner is just a huge thrill.”

Hyeronimus took up the running on Shout The Bar ($15) and on a track where horses were struggling to make ground, she stuck on to win by a neck over Probabeel ($4.80).

Hyeronimus revealed he was not confident in the run and at one stage thought he had messed up the speed.

“Not once at any stage did I think, ‘she’s going to win’. She’s probably not actually a leader, she probably led by default,” he said.

“Through the middle stages I was quite worried I was going too slow and that’s why I picked the tempo up at the half mile .

“I didn’t want it to turn into a sit and sprint. I know she’s tough and I know she can run a strong 2000 and I said that all along since her second trial, I said, ‘Adrian this is our Oaks horse’ and she hasn’t let us down yet.”

Bott, who last week celebrated his first Group One with Farnan, was thrilled for Hyeronimus.

He said Shout The Bar had also done a tremendous job to progress from a provincial maiden win on debut to land a Group One at her fourth start.

“He (Hyeronimus) puts in a lot of hard yards and he’s done a fantastic job on this filly all the way through, particularly today,” Bott said.

“He kept his cool and got the right run while everyone was sorting out their positions behind him.”

Shout The Bar has firmed from $26 into $4.50 second pick for next month’s Australian Oaks with Funstar retaining favouritism at $4 despite easing.