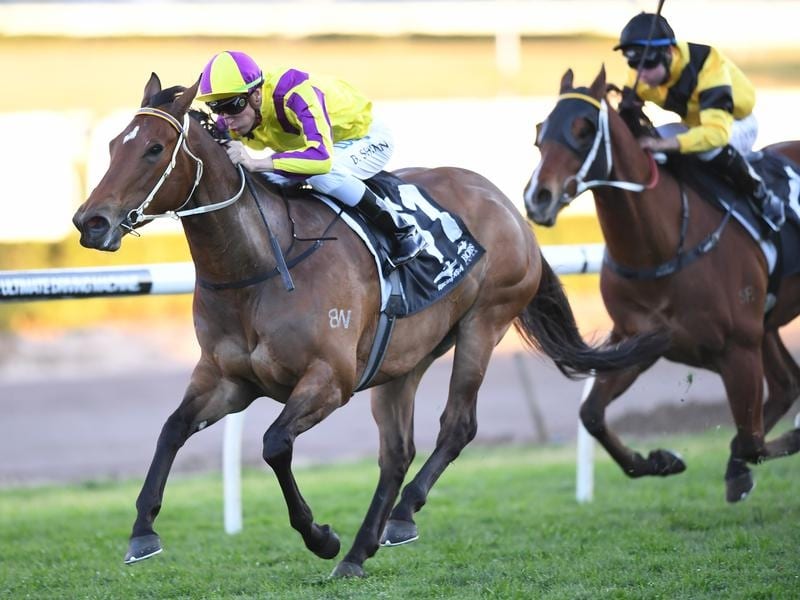 Speedster Super Too is scheduled to have her first start for premier Brisbane trainer Tony Gollan.

Noted speedster Super Too is likely to have a change of racing pattern when she makes her Brisbane debut at Eagle Farm.

Super Too is one of three horses premier Brisbane trainer Tony Gollan has accepted with in Saturday’s Open Handicap (1000m).

Glenlogan Park paid $550,000 for the mare at the Magic Millions National Sale last year and sent her to Gollan in a attempt to win more races before she becomes a broodmare.

Super Too has won five races and has been stakes placed three times for Sydney trainer Marc Conners.

After winning a Warwick Farm trial by 15 lengths in January last year, Super Too was beaten 24 lengths into last place in a race at Warwick Farm.

While nothing serious came to light, she was eventually put up for sale.

Super Too has been with Gollan since late last year and he has taken his time with her.

“She obviously is a class horse but we thought we might try to change her racing pattern. We are trying to get her to settle rather than go flat out,” Gollan said.

“Super Too has had a jump-out on Tuesday and an official trial as well. She was ridden back in the trial and not asked to do much.

“Provided she continues to please me this week she will run on Saturday. Otherwise we will to wait until the Gold Coast and a 900 metre race which is three weeks away.”

The trainer also has last-start 1000m winners Just Orm and Pizone in the Open Handicap.

“The key to Just Orm is a good barrier and he has drawn well again in barrier two,” Gollan said.

“We have probably worked out the best way to ride Pizone by letting him get back and run.”

Gollan is having one of his best seasons with his 66-1/2 wins second only to Chris Waller in the Australian metropolitan premiership.

“I would love to train 100 metropolitan winners this year but the winter carnival is always a tough time,” he said.

Gollan has been training for just on 20 years but it is in the past decade his career has really taken off with six Brisbane premierships.