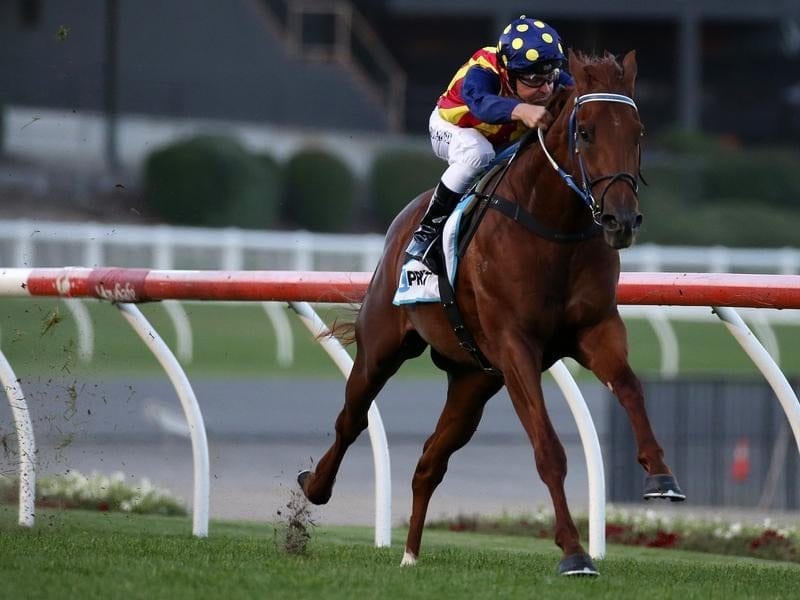 Ryan Maloney is looking forward to the challenge when he rides Nature Strip at Warwick Farm.

Melbourne jockey Ryan Maloney is looking forward to the challenge awaiting him and boom sprinter Nature Strip against dual Group 1 winner She Will Reign in the Inglis Sprint in Sydney.

Maloney has ridden Nature Strip in four of the gelding’s five starts, winning three times and finishing second in the other in the three-year-old’s only defeat.

Nature Strip is scheduled to travel to Sydney this week to take on She Will Reign and others in Saturday’s $250,000 Inglis Sprint (1100m) at Warwick Farm, aiming to extend his winning sequence to four races.

“It will be a good test for him,” Maloney said.

“He has galloped the Sydney way last week at Sandown and I felt he actually handled it better than he does the Melbourne way, so that’s a big plus.

“Obviously he has to take on She Will Reign in her backyard and he’s got to be floated up there, but she is first-up so she’s not going to be fully wound up and he is at peak fitness.

“I can’t fault him so I expect a good showing again.”

Whether Nature Strip can upstage the Golden Slipper and Moir Stakes winner remains to be seen, but Maloney has confidence in the lightly raced gelding’s talent.

“I’m sure he can measure up,” Maloney said.

“It”s probably a big call saying he can beat her.

“I’ve got no doubt he’s got the ability to, but obviously he’s got to float up there and he’s got to get the run to suit. Providing all that (goes to plan), I’m sure he’s going to give her a good run for her money anyway.”

Nature Strip won a benchmark-70 race over 1000m by 5-1/2 lengths at Sandown last month but was made to fight to beat Prezado by three-quarters of a length in the Inglis Dash (1100m) at Flemington last start.

Maloney was still satisfied with that performance given it was Nature Strip’s first attempt on the straight course and he was backing up 10 days after Sandown.

“He just got a little bit lost and the edge was off him from Sandown and he still did what good horses do, and that was win,” he said.

“When the horse came up beside him he found enough to put him away. And the second horse is no slouch.”