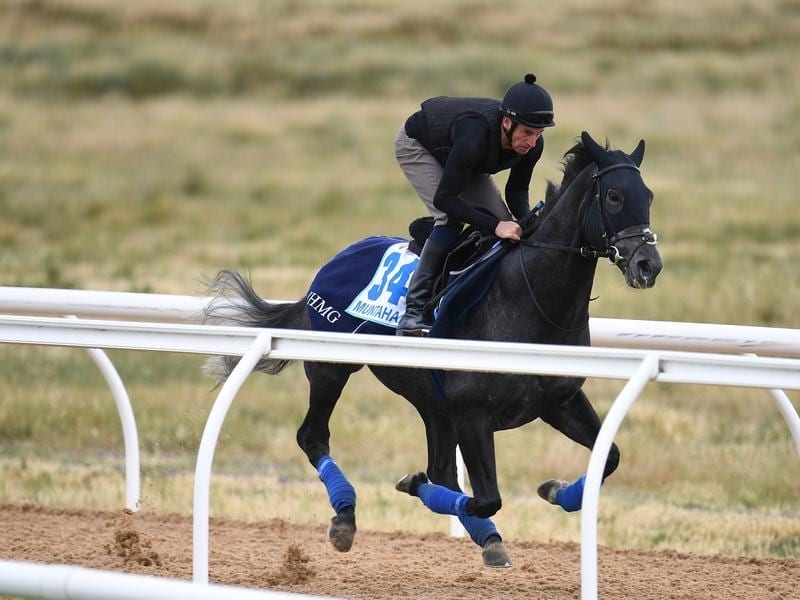 English stayer Muntahaa will be out to cap a stellar year for John Gosden in the Melbourne Cup.

UK trainer John Gosden has enjoyed a cracker of a season which can be enhanced if Muntahaa wins the Melbourne Cup.

Big race wins have been recorded by Stradivarius, Cracksman and more recently Enable at the weekend’s Breeders Cup Turf at Churchill Downs.

Gosden junior said in the unlikely event Muntahaa was to win it would mean the world to the stable.

“It’s the race everyone wants to win,” he said.

“It’s such a huge deal internationally. I’d be speechless after it.”

Gosden, 23, says it’s been an amazing experience having been sent down to Australia to prepare Muntahaa for the Cup.

He spent three months working at Lindsay Park two years ago, taking away some new technological ideas he would like to employ in the stable.

“Down here they’re a lot more advanced with technology to assist training, like treadmills, aqua treadmills, walkers and I know swimming pools aren’t high tech but it’s something different to what we do at home,” Gosden said.

“All that stuff can be implemented more in the UK than it is now and I’m trying slowly to get him around.

“He’s very keen on treadmills and sea-walkers, but unfortunately they’re extremely expensive so we haven’t got around to one yet, but if he wins a lottery, maybe.”

While TJ Comerford has been sending videos of trackwork back to Irish trainer Aidan O’Brien, Gosden said his stable wasn’t as technologically advanced.

“I’ve been on the phone everyday and letting him know how the horse is and he lets me know what to do with it,” Gosden said.

Muntahaa is owned by Sheikh Hamdam’s Shadwell Stud, aiming for its third win having scored with At Talaq (1986) and Jeune (1994).

Gosden said all had gone smoothly since arriving in Melbourne on October 13 with Muntahaa, a last-start winner of UK’s most prestigious handicap the Ebor, a $12 chance in betting.

“The flight down took a bit out of him as you would expect,” Gosden said.

“But he’s recovered well and is bouncing around the place happy and well so fingers crossed he handles the parade and runs alright.”