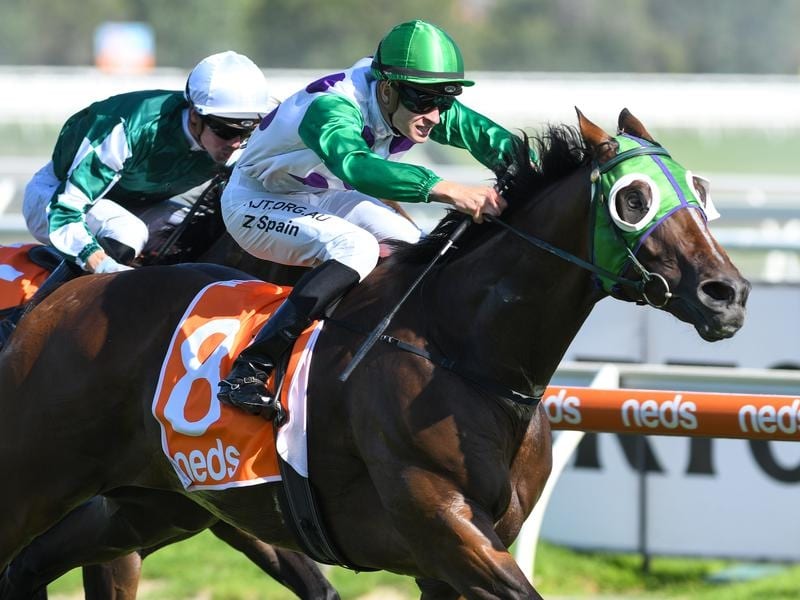 Morvada has turned the tables on summer rival Yulong January in the John Dillon Stakes at Caulfield.

Adelaide visitor Morvada has ended the summer winning sequence of Yulong January in the Listed John Dillon Stakes at Caulfield in a performance which has come as no surprise to his veteran trainer.

The Peter Jolly-trained Morvada lined up for a rematch with Yulong January in Saturday’s 1400m Listed race after being narrowly beaten by the Ciaron Maher and David Eustace-trained gelding at Flemington a few weeks earlier.

This time Morvada ($10) was able to sit outside the $2.25 favourite and when Yulong January was unable to open a winning break early in the home straight, Morvada took over late under jockey Zac Spain to score by 1-1/2-lengths.

Runner-up Yulong January had been chasing his fifth-straight win stretching back to late November.

Streets Of Avalon was another length away third.

“I just couldn’t work out why he wasn’t fancied more,” 76-year-old Jolly said.

“He led all the way last start and Yulong January beat him by a long head.

“It didn’t worry me but I’ve been very confident.

“I’ve worked out how to train him now too. He needs a bit of time between runs and we keep him fresh.”

Six-year-old Morvada took his record to seven wins from 35 starts.

Jolly said the gelding had had a lot of leg issues during his career, while the trainer said the galloper also put him in hospital for 10 days as a younger horse when he kicked him in the face.

“I’ve had that much trouble with the horse,” he said.

“He’s always had that much ability but he’s had a lot of leg problems and I’ve had to nurse him through that.

“And this is the first preparation I’ve been able to give him where something hasn’t gone wrong with him.”

Jolly will consider upcoming options but said Morvada was likely to head home for a break, having won three of his past four starts, before turning attention to the Adelaide carnival in May.

Eustace was proud of Yulong January’s effort despite the defeat.

“He ran really well,” he said.

“He just got beaten by a horse he had to give three kilos to. We couldn’t ask for any more from the horse.”