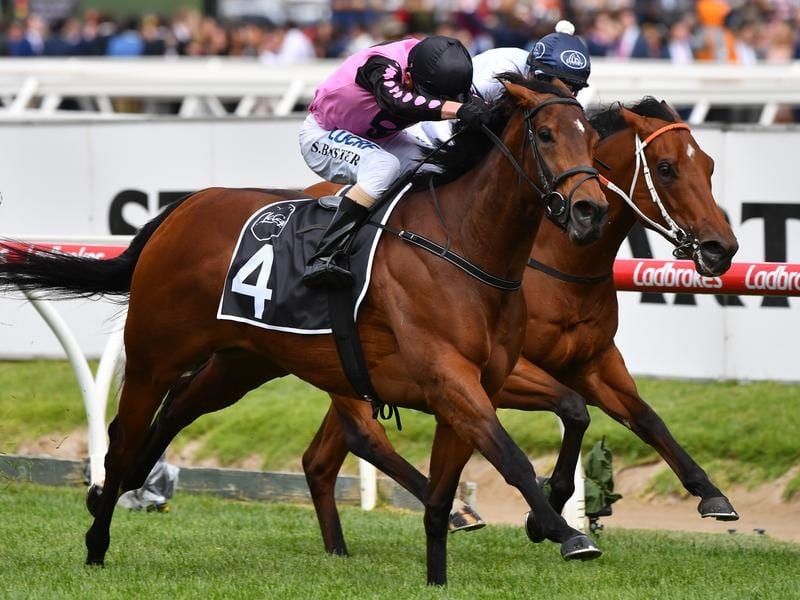 Miss Leonidas has backed up a Group One Moir Stakes placing to win the Group Two Caulfield Sprint.

Miss Leonidas has appreciated a drop in grade in the Group Two Caulfield Sprint.

The Shaun Dwyer-trained mare had finished second behind Nature Strip in the Group One Moir Stakes at The Valley before leading throughout in Saturday’s 1000m dash.

Jumping straight to the front under Stephen Baster, Miss Leonidas, the $3.90 equal favourite, held off fellow equal favourite God Of Thunder by a half-length with Malibu Style ($11) a long-head away third.

Baster rode Miss Leonidas in the Moir Stakes and said with a more favourable draw the mare may have gone closer to troubling Nature Strip, who scored by a short neck.

Nature Strip went on to finish fourth in Saturday’s Everest at Randwick.

“I think if she had drawn not quite as wide the other day, she might have beaten Nature Strip.

“My concern today was barrier one because she can be a bit funny out of the gates.

“Once she got out I gave her a little dig, which was probably the worst thing to do, as she got over-racing a bit.

“But on her form, she had the best form, so I wasn’t too concerned.”

Baster said he could hear the runner-up God Of Thunder approaching and was worried Miss Leonidas may be overhauled, but the mare responded to hold on for a strong win.

Sally Dwyer, daughter of trainer Shaun, said Miss Leonidas would now be spelled ahead of a light autumn.

“Then she’ll come back for the autumn (in Melbourne) where she might have one or two races, maybe three,” Dwyer said.

“Then she’ll be off to the breeding barn.