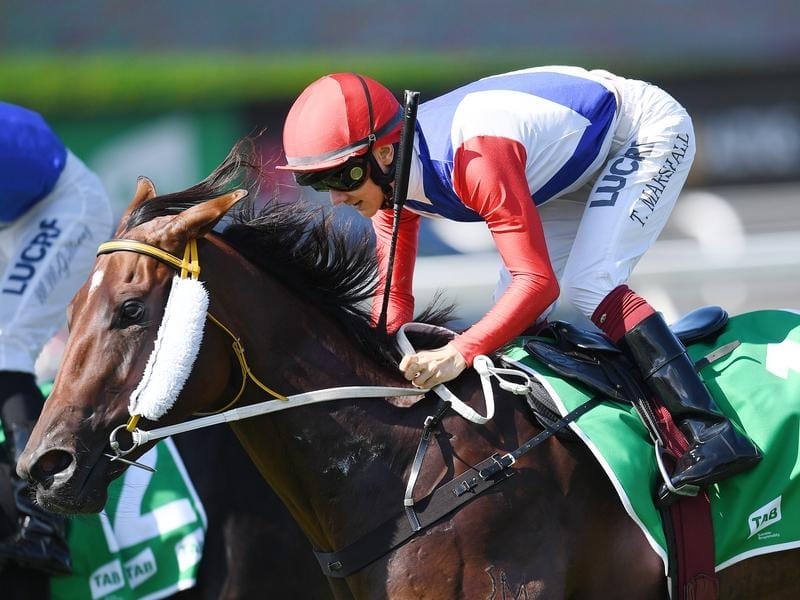 Mishani Hustler has now won seven races after taking out the Jewel Handicap at Eagle Farm.

Troubled trainer Ben Currie is banned from attending Eagle Farm, but his top colt Mishani Hustler did the talking for him in the $200,000 TAB Jewel Handicap (1200m).

Currie faces a series of stewards inquiries and stay applications in the next month which was the catalyst for him to be banned from attending Brisbane Racing Club tracks – Eagle Farm and Doomben.

Currie was allowed on track at the Gold Coast last week where his mare Mishani Vaidra won the $125,000 Gold Coast Stakes.

However, the meeting was washed out before Mishani Hustler’s Jewel race and it was transferred to Eagle Farm on Saturday.

Stable spokesman Nathan Evan said the exact plans for Mishani Hustler would not be determined until he had been able to get over Saturday’s run.

“This horse is a winner. He tries so hard. There is a chance he will run in the Weetwood Handicap at Toowoomba in a fortnight or he might have a little break for some of the races later in the winter.”

Mishani Hustler has now won seven races and $573,000 in prize money, meaning there are plenty of options for him in the winter.

The win was the biggest in terms of prize money for jockey Taylor Marshall ,who came out of his apprenticeship in January.

“I am lucky to have the support of Mick (owner Mick Crooks) and Ben (trainer Currie,” he said.

Marshall has now won five of his six rides on Mishani Hustler and hopes to keep the ride into the future.

“That was a very honest run,” McGillivray said.

Rockhampton galloper The Tax Accountant earnt himself a further trip to Brisbane with his third.

Another of Currie’s runner Soxagon came from well back in the field to finish fourth and will also continue on in Brisbane races.