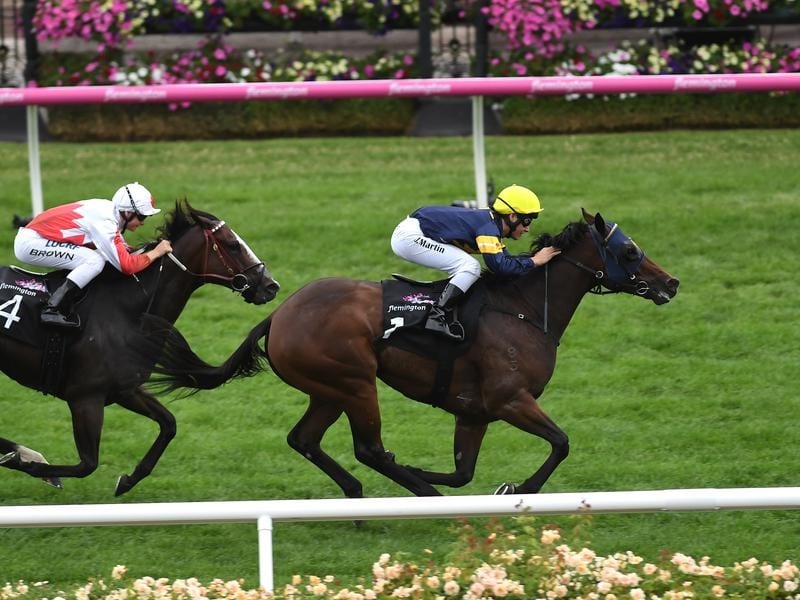 Course specialist Milwaukee (right) will back-up in the Listed Straight Six at Flemington.

The Mike Moroney-trained Milwaukee is set to run on a seven-day back-up when he contests the Listed Straight Six at Flemington.

Milwaukee finished second behind Order Of Command in last year’s edition of the 1200m sprint and heads into Saturday’s race at the fourth start of his preparation.

In a deceptive finish at Flemington last Saturday over 1000m, Milwaukee was beaten into third place behind Prezado and King Of Hastings.

Moroney said it was always the plan to back the sprinter up in Saturday’s race and is convinced only waywardness late in last week’s race cost him going into the Straight Six as a last-start winner.

Milwaukee has drawn out in barrier 12 after jumping from barrier six last week.

“If he had just gone straight he would have won on Saturday,” Moroney said.

“In the last 150 metres he moved from about seven off the fence to one off the fence, and that’s what cost him.

“He can do that now and again, wanting to lay in and find the rail. It wasn’t until he cleared the other horses that he started doing it.

“It looked like he had them beaten. He probably lost a length doing it and was only beaten two noses.”

The Straight Six is the only stakes race on Saturday’s nine-race program with Godolphin’s Home Of The Brave the highest-rated galloper.

Having been ridden by apprentices Thomas Stockdale, Michael Poy and Lewis German in his three starts this campaign, senior rider Jye McNeil takes over on Saturday.

Moroney said Milwaukee was a burly type and believes he would have only benefited from last Saturday’s race.

“You’d expect the run to improve him even further,” he said.

“As he’s got older he takes a fair bit of racing and work.”

Milwaukee is a regular in straight-track sprints at Flemington, having registered four wins and four placings from 10 starts.

He is rated the $4.40 favourite to overturn last week’s waywardness from Haunting at $5.50, a stablemate to Home Of The Brave.