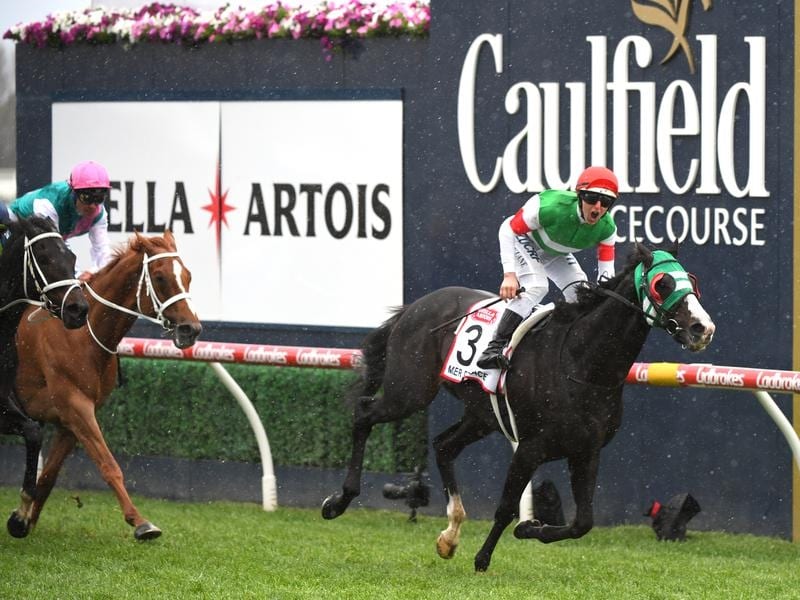 Japan has claimed one of the jewels of spring racing with Mer De Glace winning the Caulfield Cup.

Japan has claimed a second Caulfield Cup victory in five years with Mer De Glace overcoming a slow start to win in the $5 million race.

Like Admire Rakti who won for Tomoyuki Umeda in 2014, Mer De Glace settled back in the field before circling his rivals to score a soft win.

A trip to Japan by Lane during the cooler Melbourne months cemented the partnership with Mer De Glace’s trainer Hisashi Shimizu.

It was Lane who persuaded the trainer to bring Mer De Glace to Melbourne after winning two races on the horse during his visit.

The jockey planted the seed about a trip to Melbourne after riding Mer De Glace to a second win over 2000m on June 1.

“Connections were really happy to come because it looked like he was going to get 53 kilos,” Lane said.

“But then he won again and it was questionable because he was going to go up to 55.5 (kilos).

“I begged them to come because I knew 55.5 was still a winnable weight.

“It’s a big effort to get him here in the order they did and I’m just so happy to be a part of it.”

Lane said Mer De Glace was nothing to look at and described him as a tradesman who keeps turning up and winning.

Having the second widest draw in Saturday’s 18-horse field was no barrier for Lane who allowed Me De Glace to settle back in second-last place.

“I couldn’t go the speed early and took my medicine and rode him cold,” Lane said.

“He switched off and was going to win a long way out.”

Lane now has the chance to add the Cox Plate to his record when he partners $3.60 favourite Lys Glacieux, another Japanese visitor, in next Saturday’s $5 million race at The Valley.

For Shimizu, who trained one of Japan’s champions Kitisan Black to win 12 of his 20 starts, victory in the Caulfield Cup was a great thrill.

Shimizu said it was an advantage having Lane ride the horse in Japan.

Mer Grace has 55kg in the Melbourne Cup and is eligible for a penalty.

“We will see how the horse pulls up and talk to the owners about whether we go on to the Melbourne Cup,” Shimizu said.

“It means so much to win this race.”

Mer De Glace shortened from $26 into $9 for the Melbourne Cup on November 5 while northern hemisphere three-year-old Constaninople leapt to the top of that market, firming from $12 to $7, following his unlucky fourth as the $6.50 favourite.

Senior Lindsay Park trainer David Hayes said Constantinople suffered an interrupted passage in the straight and was delighted with the run.

“If there is a positive out of finishing fourth is that he escapes a penalty for the Cup,” Hayes said.