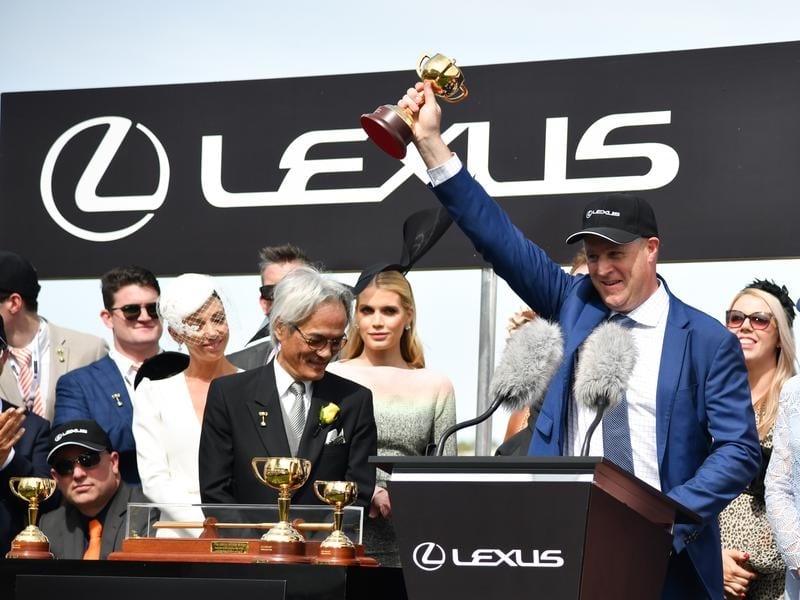 Trainer Danny O’Brien (r) has had a week to remember with wins in the Melbourne Cup and VRC Oaks.

After a memorable Melbourne Cup carnival, trainer Danny O’Brien believes there is plenty to look forward to with his exciting squad of horses.

O’Brien had 13 starters across the four days of the Melbourne Cup Carnival, registering four wins, three seconds and a third.

“It’s a big team effort, as everyone knows, to get horses to this week and to get them to present so well and race so well.

“Everyone has worked enormously hard and then the icing on the cake is that our jockeys rode really well for us.

“You can still present the horses and come away with seconds and thirds and the week is not what it was.

“It’s an unbelievable buzz to win the Melbourne Cup. Particularly with the way the race presents now with all the international competition.

“We’re very proud of Vow And Declare and we’re very excited about Miami Bound and we’ve got a lot of nice horses at home.

“So we’re really on the upward spiral.”

O’Brien was able to win a stakes race on all four days of the carnival.

“We’ve certainly never done that before,” he said.

“A couple of young horses like Banquo and the horse that ran second on Oaks day, Russian Camelot, we think they’re very exciting colts for 2020 and it’s very exciting.

“Even Vow And Declare himself, he’s only just turned four and he hasn’t had a tough spring.

“So we’ve got a lot of nice horses there for the rest of the year too.”

The trainer was involved in a protracted battle with officials over a cobalt case which he eventually won early last year but the process took its toll on his business which he has steadily built back up.

Vow And Declare was taken to O’Brien’s coastal property near Barwon Heads the day after the Melbourne Cup.

“If the weather ever turns we’ll probably put him out in the paddock for a few weeks but I was loath to put him out at the moment,” O’Brien said.

“I’m going to go down on Monday morning and take him down the beach and have a look at him. But he’ll have a few weeks off and potentially run first-up in the Australian Cup (March).

“Then maybe the Tancred and maybe the Sydney Cup. We’ll see how he’s weighted and how he comes up.”