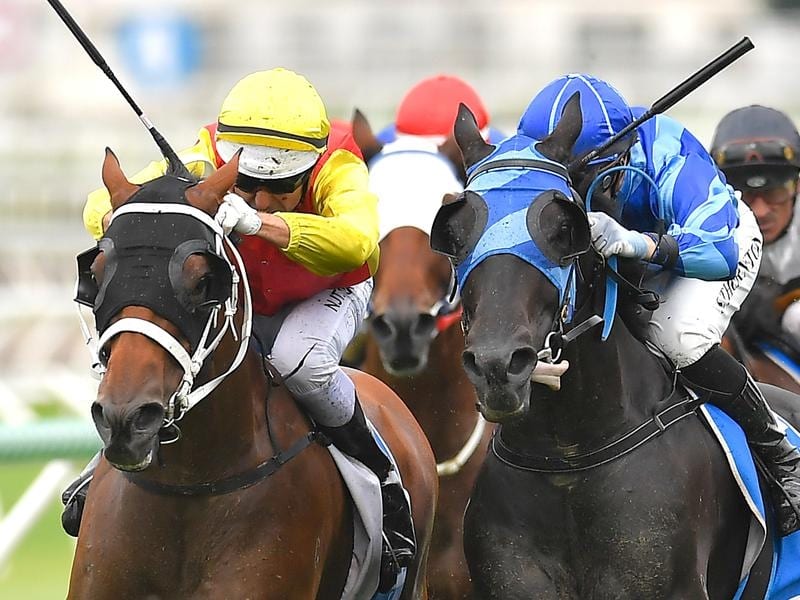 Spectroscope (R) ran a nose second to New Universe at Eagle Farm in his last start.

Caloundra’s Natalie McCall has one of the best strike rates this season of any Australian trainer and she would dearly like to add to it with frustrating Spectroscope at Doomben.

Spectroscope will attempt to end a run of outs that has stretched nearly three years in the Listed Tattersall’s Members Cup (1600m) on Saturday.

McCall has had 22 winners and 22 minor placings this season from 85 runners giving her a 26 percent win strike rate and 52 percent for placings.

Four of her past five runners have won, including promising three-year-old The Sinner at Eagle Farm last Saturday.

But Spectroscope has been a special work for McCall since he joined her stables from Godolphin a year ago.

Spectroscope did his early racing in France, where he won twice before being transferred to Australia.

He won the 2017 Doncaster Prelude, which was his last victory but he has raced well almost exclusively in top company since.

Spectroscope was sold to clients of McCall and has continued in that form without winning.

The gelding has had seven starts for McCall and never been disgraced.

At his last start he was a nose second to New Universe in a 1600m race at Eagle Farm.

McCall she is confident Spectroscope is close to another win.

“He gets back in his races and his high rating means he gets big weights, which is no help to a small horse,” McCall said.

“But he never runs a bad race and his time is coming.”

“We were originally looking for a Rockhampton Cup-type horse when we went to the dispersal sale but came away with him. His rating is too high for the provincials but he is paying his way here.”

McCall said Spectroscope would press on to an 1800m race at the Gold Coast on March 14.

“Then we can give him a break for the winter and the Listed races as there are plenty to suit him,” she said.

McCall is reaping the benefits of planning put into action a few years ago.

“Basically we only have room for 22 horses and we have to make certain they are the right kind of horse,” she said.

“We move them on quickly if they can’t show us much.”

McCall comes from one of Queensland’s best-known racing families. She is the daughter of trainer Ray McCall who had top gallopers such as multiple stakes winner Messiaen and current sire Top Echelon.

Natalie McCall is the only woman to train a Group One Stradbroke Handicap winner in River Lad in 2014.