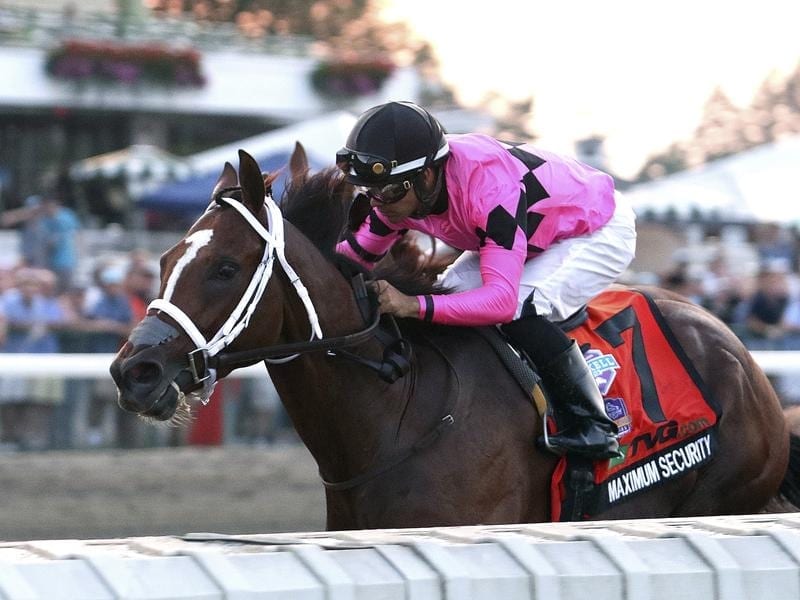 Maximum Security has captured the $1 million Haskell Invitational and, unlike the Kentucky Derby, survived a steward’s inquiry.

His win at Monmouth capped a long day which included a major delay triggered by intense heat and safety concerns for the horses and riders, leading to the cancellation of six races.

When racing resumed around 6pm, the six stakes races on the card went off without a hitch until the Haskell.

Maximum Security got to the finish line first, outlasting the Bob Baffert-trained Mucho Gusto by 1-1/4 lengths.

For a minute, it seemed a clear-cut win. However, the stewards posted the inquiry sign. Videotape replays showed King for a Day had to check when Maximum Security and Mucho Gusto stormed past.

It was quickly dismissed, unlike the Derby when there was a 22-minute delay before Country House was elevated to the top spot and Maximum Security was dropped to 17th place. It was the first time a horse that crossed the finish line first in the Derby was disqualified.

“The first time I saw the replay, I thought there was no way they can take this horse down. I’m not a steward but I did not think he did anything that cost. … The other horse was going backward at the time.”

West, who is still fighting the Derby disqualification in federal court in Kentucky, is certain he has the best colt in the land

“If it doesn’t, I don’t know when a division has a clear-cut leader,” he said. “Am I prejudiced, of course I am.”

King for a Day, who beat Maximum Security in the Pegasus here last month, and four of the other five colts were closely bunched early with only Everfast trailing.

Around the far turn, Maximum Security and jockey Luis Saez and Mucho Gusto and rider Joe Talamo charged around King for a Day, who was on the rail.

West and trainer Jason Servis are thinking about running Maximum Security next month in the Travers at Saratoga.

None of the horses who competed in the eight races run showed any sign of heat exhaustion. They were hosed down with water after the races.

With racing under pressure because of many horse deaths in California, most East Coast tracks on Friday cancelled their Saturday cards, including Saratoga.