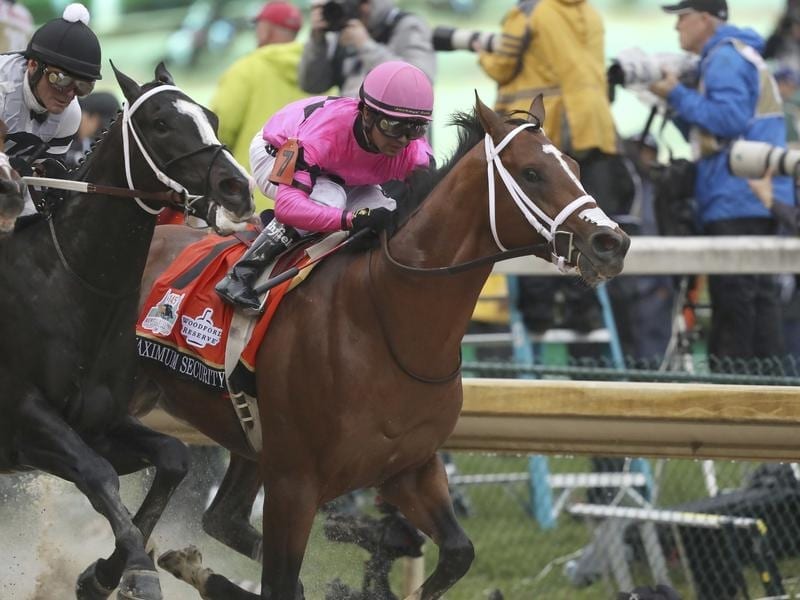 Maximum Security will take on six rivals in his second start since being disqualified as the winner of the Kentucky Derby when he runs in the Haskell Invitational at Monmouth Park.

The Jason Servis-trained colt has drawn the outside barrier for the 1-1/8-mile (1800m) race on Saturday (Sunday AEST).

Luis Saez will ride the 8-5 early favourite who was the first horse to be disqualified for interference in the 145-year history of the Kentucky Derby.

While the Haskell field is small, Maximum Security will face stiff competition and a lot of speed.

Hall of Fame trainer Bob Baffert has sent dual Grade Three winner Mucho Gusto in from the West Coast. Baffert will be seeking his ninth win in this race.

King for a Day, who beat Maximum Security by a length here last month in the Pegasus Stakes, is also entered. Joevia, third in the Belmont Stakes, and Everfast, the Preakness runner-up,are also there along with long shots Bethlehem Road and Spun to Run.

“No pressure,” Servis said after the draw.

If Maximum Security wins Saturday’s race, he will be the only three-year-old colt with two Grade One victories this year, having captured the Florida Derby in March.

“Guys keep asking me about speed, speed, speed. We ran against 19 in the Derby. We are not going to be afraid of going against six.”

Gary and Mary West, the owners of Maximum Security, have filed a motion in the US District Court in Kentucky against the state Horse Racing Commission and race stewards, seeking to reverse the horse’s disqualification and to restore their share of the purse money. Both sides have asked the court for summary judgments.

Baffert said Maximum Security was the class of the field. However, Mucho Gusto is coming off two impressive wins in California, including one in the Affirmed on June 16 in which he rated well and closed strongly to win.

Mucho Gusto is the 2-1 second choice.