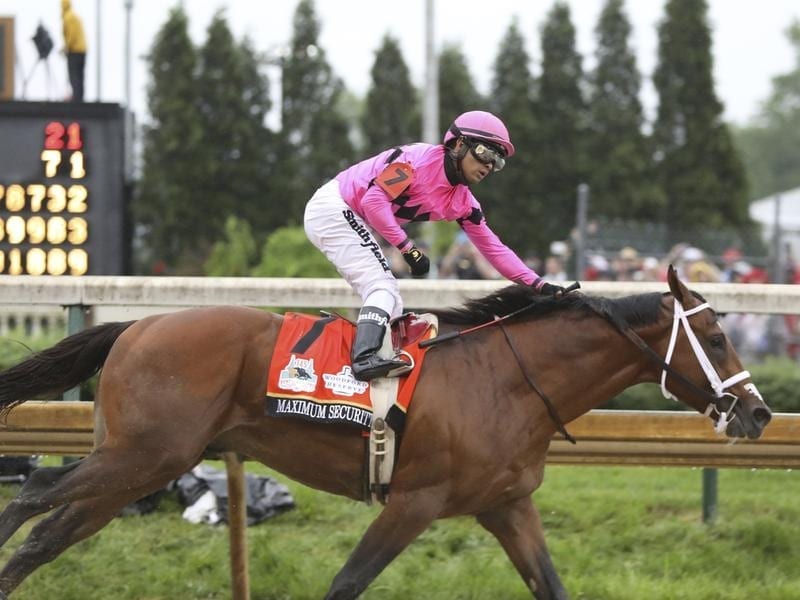 Maximum Security has been beaten at his first start since his Kentucky Derby disqualification.

Maximum Security has been beaten in his first start since being disqualified as the winner of the Kentucky Derby.

The colt lined up at Monmouth Park in New Jersey on Sunday (Monday AEST) as the overwhelming favourite but was beaten by King For A Day.

He stumbled slightly at the start but got to the lead with King For A Day stalking him before assuming control in the straight to win by a length.

“I think the next race will be better,” Maximum Security’s trainer Jason Servis said.

It marked the first time Maximum Security had been beaten in six starts, and the stumble might have been the difference.

“It was a tough week,” Servis, who had debated whether to run Maximum Security because he was not sure he was ready, said.

“He was feeling pretty good this morning. He was jumping and kicking. But the stumble hurt us a lot.”

King For A Day was the second favourite after his win in the Sir Barton at Pimlico on the Preakness undercard.

Owned by Gary and Mary West, Maximum Security finished 1-3/4 lengths in front of Country House in the Kentucky Derby on May 4 but was disqualified by Churchill Downs stewards for interference to eventual Preakness winner War of Will.

The Wests are challenging the Kentucky Derby disqualification in federal court.

Maximum Security is next expected to run in the Haskell Invitational at Monmouth Park on July 20.