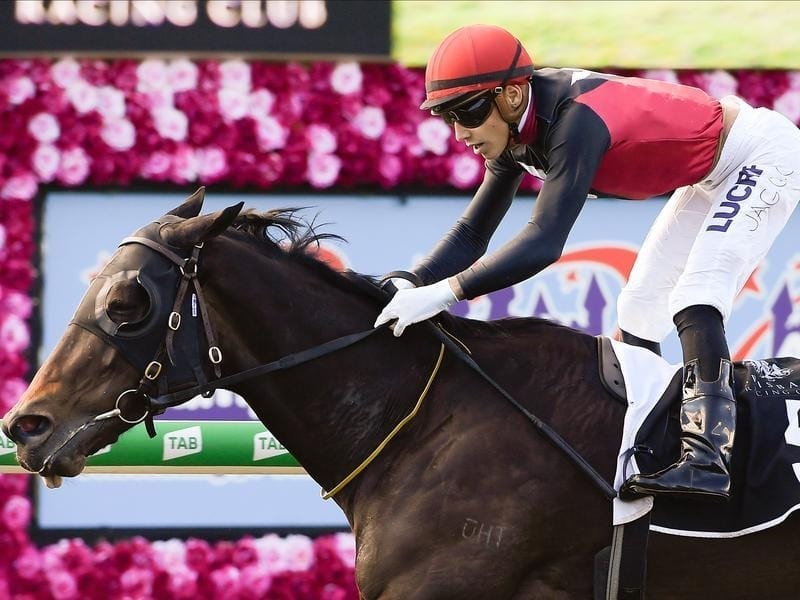 Manaya enhanced her value as a broodmare prospect when she dropped in class to win at Eagle Farm.

Manaya remains for sale despite an impressive win in the Workforce Success Handicap at Eagle Farm.

Manaya appreciated a drop back from stakes races to score a half-length win over Morendi ($41) with three-quarters of a length to After All That ($3.90).

The mare is a half-sister to Group One winner Hot Danish and has been put up for sale as a broodmare prospect.

Trainer Michael Costa said if the owners didn’t get a good offer the mare would race on for another season.

“I would like to have her race on but she won a stakes race as a two-year-old and she is half-sister to a top horse in Hot Danish. So I would imagine she will bring a big price,” Costa said.

“She ran in four stakes races during the winter and didn’t have any luck at all. But it was a big drop in class today and she got the run of the race.

“Funny thing, she is a strange horse who is a lot better when she gets to the outside in her races and can run on.”

Jockey Tegan Harrison completed a winning double on Red Stina ($8.50) in a race she described as a “girls day out”.

“She (Red Stina) was bred by women, is owned by women and was ridden by a woman,” Harrison, who won earlier on Boom Boom Epic, said.

Red Stina’s trainer Rex Lipp missed the win because was judging polo ponies at a show, but his wife Ros Lipp, who part-owns the filly with breeder Grania McAlpine, believes the filly has a big future.

“Now she is getting out in distance she could go a good way,” she said.

Chris Waller moved to outright second place on the metropolitan trainers’ premiership with Borazon ($3.40) gave him his 48th winner of the season.

Borazon beat his stablemate Miss Shanti ($8), who was recently bought by Waller, in a driving finish and stable manager Paul Shailer said both were well suited to racing in Queensland.

McCall sponsored the race to help one of her owners who was involved in promoting the day.