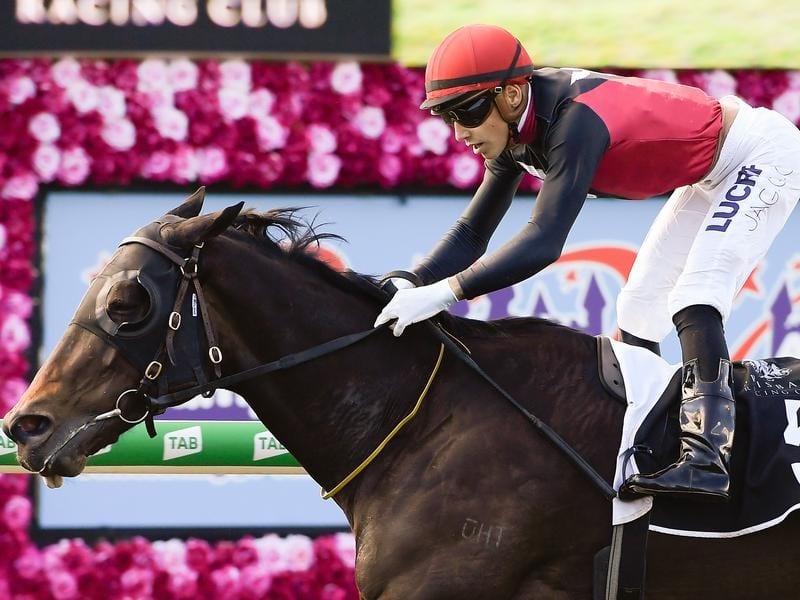 Talented mare Manaya is on trial for a Sydney trip when she resumes racing at Eagle Farm.

Gold Coast mare Manaya has long promised to win another black-type race and she takes the first step towards achieving it at Eagle Farm.

Manaya has been a great performer for trainer Michael Costa, winning seven races and almost $350,000 in prize money.

But luck has deserted her in stakes races since she won a black-type level at her first start.

Manaya has had two barrier trials in preparation for her return from a spell in the Queensland Chinese Jockey Club Open Handicap (1200m) on Saturday.

If she races well Costa is looking at chasing black-type races with her in the Sydney autumn.

“Races like the Triscay Stakes (Group Three at Randwick on February 15) would suit but there are plenty of other fillies and mares races in Sydney,” he said.

Costa has been in New Zealand for the Karaka Yearling Sales but has been kept up to date on the mare by his staff.

“She trialled well twice before I left and the reports were she worked well on Tuesday morning,” Costa said.

Manaya is now raced by the Glenlogan Park Stud which bought her through an online auction.

Glenlogan concentrates much of its business on quality mares which it sends to top sires and that awaits Manaya later this year.

But first, Costa is determined to get another black-type win.

Costa has had a big opinion of Manaya since he took her to Scone for her first start where she won the 2016 Listed Woodlands Stakes.

Since then Manaya has generally raced in top company and was far from disgraced in three black-type races in the winter.

However, the best guide to her ability was when she won a Gold Coast race when her rein broke and she ran to the outside fence but was still far too good.

Costa is rapidly developing a reputation for producing top mares with Seentoomany scoring an impressive win at the Sunshine Coast on Monday.

Another of his mares Malahide won at Eagle Farm last month and was only two lengths behind Invincibella in the Magic Millions Fillies and Mares race.

Costa is building up his stables with the backing of some big clients and has been a buyer at all the major yearling sales.

“I only got one at the New Zealand sales but we will double down on the Sydney sales this year,” he said.