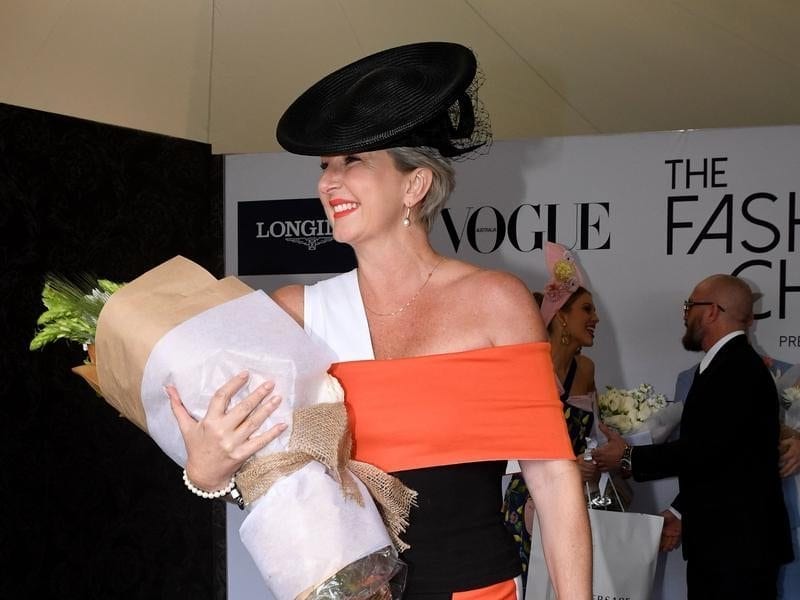 A Newcastle woman in a simple outfit has won the fashion competition during Everest day at Randwick.

Avoiding floral and fuss for the spring racing carnival paid off for Samantha Cook who was deemed the most fashionable person at Randwick on Everest day.

Ms Cook won first prize in The Fashion Chute on Saturday in an orange, black and white block-coloured skirt and top by designer Rosetta Getty.

“As soon as I knew I was coming I thought it’s a big race, on for the first time. I just knew straight away that was going to be something different,” she told AAP.

“There’s always a lot of florals and everything here.

“I don’t like a lot of fuss so I wanted something that was simple and elegant.”

The 47-year-old from Newcastle purchased the outfit after securing tickets with her family to the $10 million race, pairing it with Scanlan Theodore white mule shoes and black accessories she already had at home.

Her husband Michael said she is “not on the circuit” of racing fashion competitions but used to enter years ago.

Ms Cook won a haul worth more than $20,000 including return flights for two to Europe and a makeover while top three finalists Crystal Kimber and Neil Carpenter received $2000 in prizes and a celebratory bottle of Moet.

Entrants were photographed throughout the day before the top 10 were picked and the winner was announced.

Milliner Nerida Winter and jeweller Nicola Cerrone, who made the $320,000 black diamond Everest trophy won by Redzel, were two of the four Fashion Chute judges and agreed that simplicity and elegance spelt out victory.

“I just think that the racecourse is not the place for being overdone and costumey. You’ve got to be yourself. If you look around there’s just a little bit too much overdoneness.”

Mr Cerrone said: “Exactly, the outfit’s her personality. You go to the races to have a good time in the afternoon.”