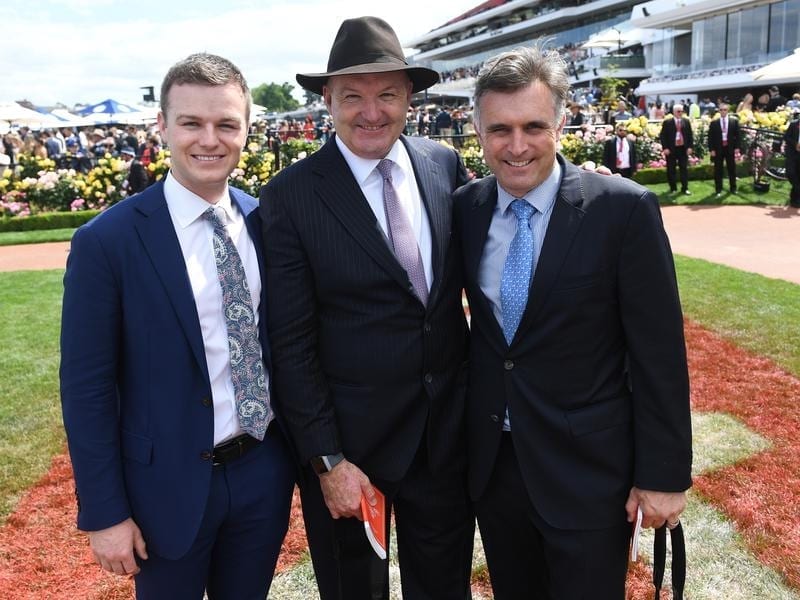 The Lindsay Park team will have two runners in the Group Two Sandown Guineas for three-year-olds.

Lindsay Park will have a two-pronged attack on the final feature three-year-old race of the spring carnival at Sandown.

Long Leaf and Good ‘N’ Fast will line up for the stable of David and Ben Hayes and Tom Dabernig in Saturday’s Group Two Sandown Guineas.

The three back up after contesting races on the opening day of the Melbourne Cup carnival at Flemington.

Long Leaf took on the sprinting three-year-olds in the Coolmore Stud Stakes, finishing sixth behind Sunlight over 1200m, while Good ‘N’ Fast finished eighth behind Ranier in the 1600m Carbine Club Stakes.

Dabernig is not sure how Long Leaf will handle the rise to 1600m having disappointed the stable at that distance in the Champagne Stakes at Randwick as an autumn two-year-old.

“It’s a bit of an unusual prep for us going from the 1200 metres straight to the mile,” Dabernig said.

“I don’t know what his best trip is, it’s possibly 1400 metres, so we’ll see how he handles it on Saturday.”

Dabernig said in hindsight withdrawing Long Leaf from the Listed Springtime Stakes at Flemington last Saturday may have been a mistake.

“We pulled him out because of the gate but where the winner came from, right back and down the middle, maybe we should have run,” Dabernig said.

Good ‘N’ Fast has been a consistent performer throughout the spring and Dabernig said his last-start performance could be forgiven.

The three-year-old showed his spring credentials with a Flemington win in July and ran third to the exciting colt Brutal when he resumed in September.

He also finished fourth to The Autumn Sun in last month’s Caulfield Guineas.

“He ran fourth in the Guineas and then he had an awkward run when he was exposed early in the Carbine Club,” Dabernig said.

“You wouldn’t say the best is behind him and he’s been competitive all preparation.”

Springtime Stakes winner Ringerdingding holds favouritism at $3 ahead Seabrook, one of two fillies entered, at $3.50.