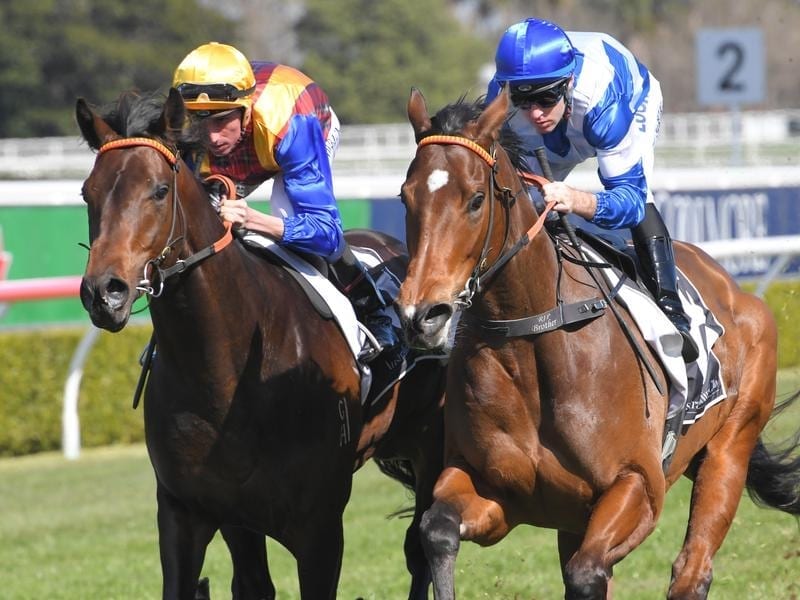 Libertini (right) has shaded her stablemate Prince Fawaz in an exhibition gallop at Randwick.

Anthony Cummings has given the stable’s leading carnival contenders, Prince Fawaz and Libertini, a day out at the races at Randwick ahead of their returns.

Prince Fawaz is already a Group One winner of the J J Atkins while Libertini is a filly the trainer believes will be an elite-level performer by the end of spring.

The two worked together over 800m between races on Saturday with Libertini, ridden by Tommy Berry, shading her stablemate on the line after tracking him into the straight.

“They worked up to where they are at in their preparations,” Cummings said.

“Libertini always likes to show off a bit and gets keen. That’s why we’re spending most of the time trying to get her to tuck in behind, settle, switch off and use herself when she’s asked to.

“Prince Fawaz, he just does nothing until you ask him. I said to Nash (Rawiller) to give him one down the shoulder at the furlong to pick up and go which he did.”

The Gerry Harvey-owned Libertini will be back at the races in a week for the first of the four races in the Princess series, the Group Two Silver Shadow Stakes while Prince Fawaz resumes in next month’s Run To The Rose.