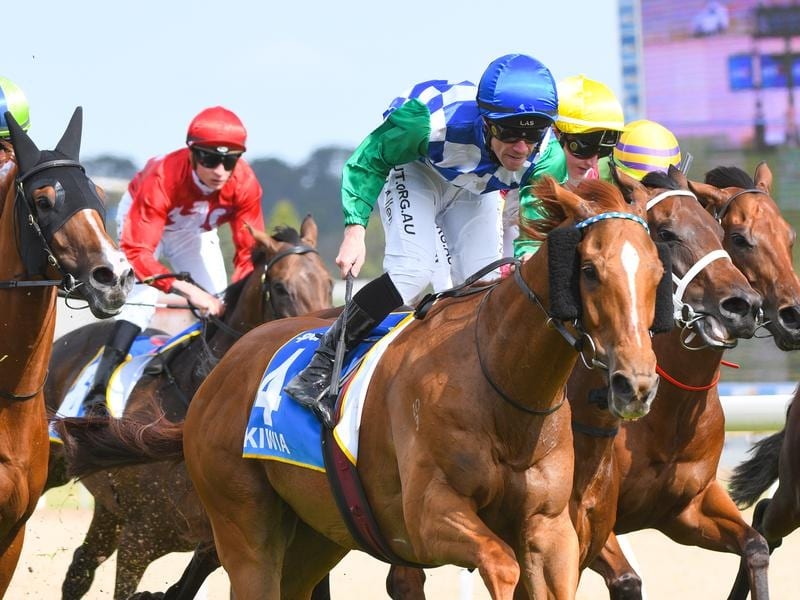 Kiwia has won for the first time in a year by claiming a second successive Ballarat Cup.

Locally-trained Kiwia has won a second successive Ballarat Cup in a result that left his trainer Archie Alexander a little stunned.

Kiwia won last year’s Ballarat Cup over 2200m for Darren Weir but was transferred to Alexander in February after a four-year disqualification was handed to his previous trainer.

The gelding was having his sixth start for Alexander, fifth for the preparation, with the trainer searching for answers prior to Saturday’s Listed race over 2000m.

As he did last last year, John Allen guided Kiwia ($16) to victory, this time defeating Double You Tee ($9.50) by a short-head with Another Dollar ($20) a half-length away third.

“And it’s with a horse that we came here with not overly confident about. He hadn’t won in 12 months and he’s had his issues.

“I refer to him as the Roger Federer of the stable as it’s hard to keep him in one piece but he came here today into the mounting yard bouncing.

“I don’t know why he peaked on this day, but for whatever reason he was flying.”

Allen thanked connections for holding off finding a jockey for Kiwia as they waited to see if second emergency Harbour Views gained a start.

The jockey was committed to riding Harbour Views who was scratched on Friday allowing Allen to ride Kiwia.

It was Allen’s first ride back aboard Kiwia since last year’s Ballarat Cup success.

“It was probably a bit tougher race this year with the increase in prize money as it brought a better quality horse,” Allen said.

“He might not have been in good form leading into the race but Archie and his team have done a good job getting him here.”

Allen said Kiwia travelled smoothly in a three-wide line but was left flat-footed when the sprint went on passing the 600m mark.

“But when I came off the back of Suzuka Devious he did quicken, but late he was waiting for the second horse,” Allen said.

“To his credit he put his foot down and it’s good to cap off the spring with a good winner like this.”

Billy Egan, rider of Double You Tee, was suspended for 14 meetings and fined $2000 for over using the whip on the gelding.