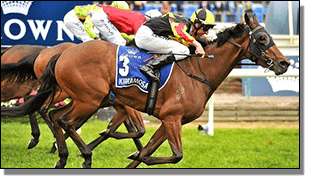 THE John Sargent-trained Kirramosa has been sparingly raced since winning the 2013 Group 1 Victoria Oaks, but it is on track for the Caulfield and Melbourne Cups this year.

Kirramosa returned to racing at Rosehill last Saturday and Sargent couldn’t have been happier with the effort, finishing less than one-and-a-half-lengths behind the winner, Peeping, when running fifth over 1200 metres.

“Very pleasing to see her hit the line as she did,” Sargent said.

“She had been working strongly and I thought she trialled great but you still want to see them do it on raceday.”

The mare is scheduled to race in the Mona Lisa Stakes on September 4, but the Melbourne Cup is its ultimate spring target.

“She’s come through Saturday in great order,” Sargent said. “The Mona Lisa is her next target at this stage with the long term goal being the Cups.”

Kirramosa has yet to be included in the Cups markets with bookmakers, but expect its price to sit around $41 when the second round of nominations are released.

There has been significant movement in the 2015 Melbourne Cup betting market as Fame Game has taken over favouritism at $11.

Fellow international runners Snow Sky and Quasillo have also been well backed on the second line at $17 with imported runner Hartnell on the same line.

New Zealand thoroughbreds Who Shot Thebarman and Mongolian Khan have both been well respected and Japanese entrant Hokko Brave represents value at $21.