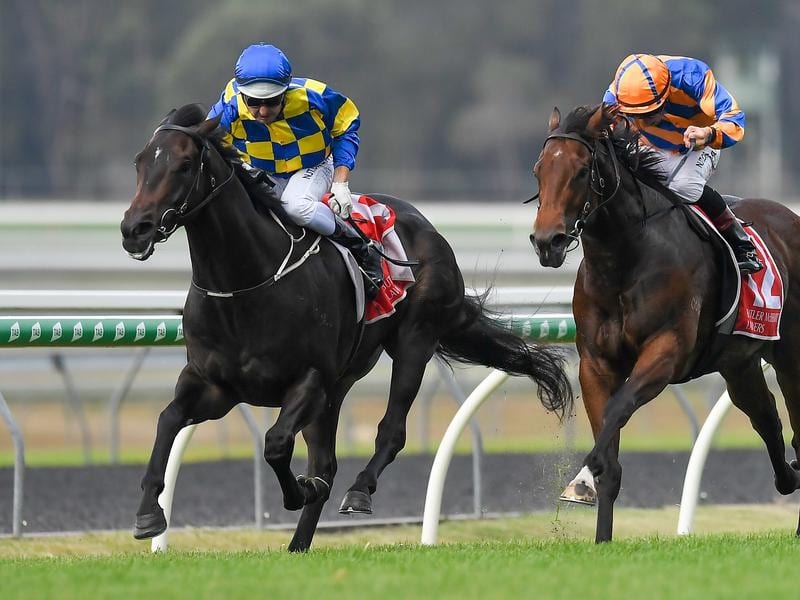 Kalik (left) can continue to defy his staying bloodlines in another sprint race at Eagle Farm.

In-form gelding Kalik can continue to prove his bloodlines are not the best guide to his sprinting capabilities when he races at Eagle Farm.

Kalik, whose breeding suggests he should be a stayer, will be aiming to make it four wins from his past five starts in Saturday’s TAB Three-Year-Old Handicap (1200m).

The gelding has impeccable bloodlines as a stayer being by Champions Gallery, who was placed in a Hong Kong Derby, out of Nuskee who is by Pentire, a noted sire of stayers.

Owner/breeder Neville Bell stood Champions Gallery at his Kilto Park complex with the idea of trying to breed a Cups horse.

Champions Gallery had limited success and was sent to Lyndhurst Stud where his stallion duties include non-thoroughbred mares.

Bell still owns Nuskee and he has a yearling out of her by Husson.

“She was passed in at a recent sale so we kept her but she didn’t get served this season,” Bell said.

One of Champions Gallery’s success stories has been Kalik who has developed into one of the better three-year-old sprinters in Queensland under the guidance of Caloundra trainer Tony Haydon.

“Tony has done a great job with Kalik. He is a very underrated trainer who gets consistent results,” Bell said.

“Kalik showed he could compete with the better three-year-olds when he was fifth in the recent Winning Rupert Plate as we had to ride him upside down from a bad barrier.

“It goes to show that sometimes bloodlines aren’t always a guide to what distances a horse will handle.”

Bell is hopeful Kalik can accrue enough prize money in the summer to earn starts in some of the better winter carnival races.

“He is perfectly drawn in barrier two on Saturday so there should be no excuses,” Bell said.

“Kalik is still maturing so the winter stakes races might not be a total daydream.”