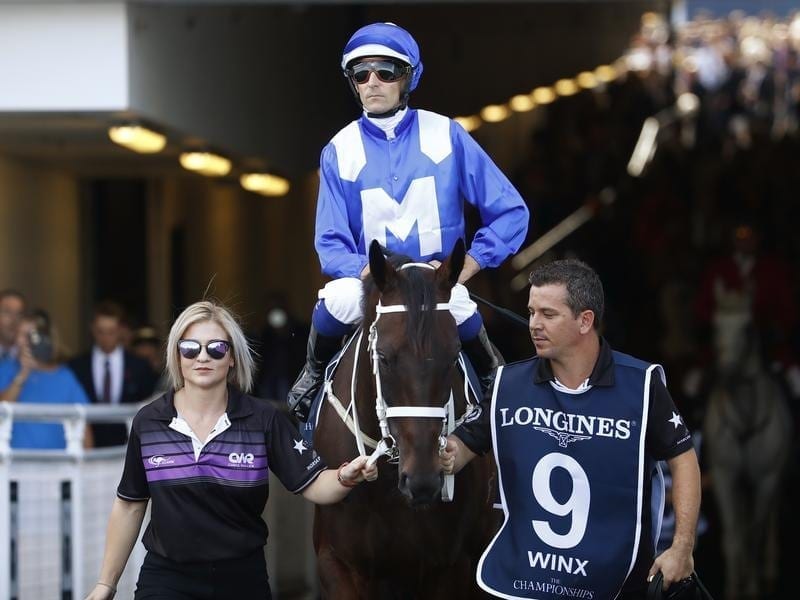 Jockey Hugh Bowman is looking forward to being reunited with Winx as she prepares to return to work.

Hugh Bowman has announced his intention to return to the Sydney racing fold in a few weeks.

Bowman had a short stint in Japan after this year’s autumn carnival in Sydney and he is currently serving a careless riding suspension incurred in the recent Japan Derby.

The star jockey, who is the rider of champion Winx, has been back in Australia since last week but said he was scheduled to ride Werther in a race in Japan on June 24 and plans to return to Sydney racing early next month.

The Hong Kong Jockey Club said trainer John Moore would decide in the next week whether Werther travels to Japan for the Takarazuka Kinen after he finished sixth in a Group Three race at Sha Tin on Sunday.

“My plan will be to start riding in Sydney from very early July and I’m actually really looking forward to it,” Bowman said.

“I’m suspended at the moment so unfortunately I’m missing the signature weekend of the Queensland racing carnival (Saturday).

“So I’ve got a little bit of time off now and I will freshen up for a return in the saddle in early July.”

As for his signature horse Winx, Bowman said he was looking forward to her return to work in preparation for the spring and her likely race return in August.

“I haven’t seen her yet so I’m looking forward to seeing her soon,” he said.

“From all reports she spelled very well and I guess once she gets back into her program at the Chris Waller stables at Rosehill he’ll start to assess where she’s at mentally and physically,” Bowman said.

“Physically she’s fine but I guess mentally we’re not going to know until we start putting the pressure on her again.

“She’s such a fine athlete and we’re expecting her to come back just as well as she went out.

“She went out on the top of her game after winning the Queen Elizabeth Stakes and we’re expecting her to come back in the same form, and we’re looking forward to it.”