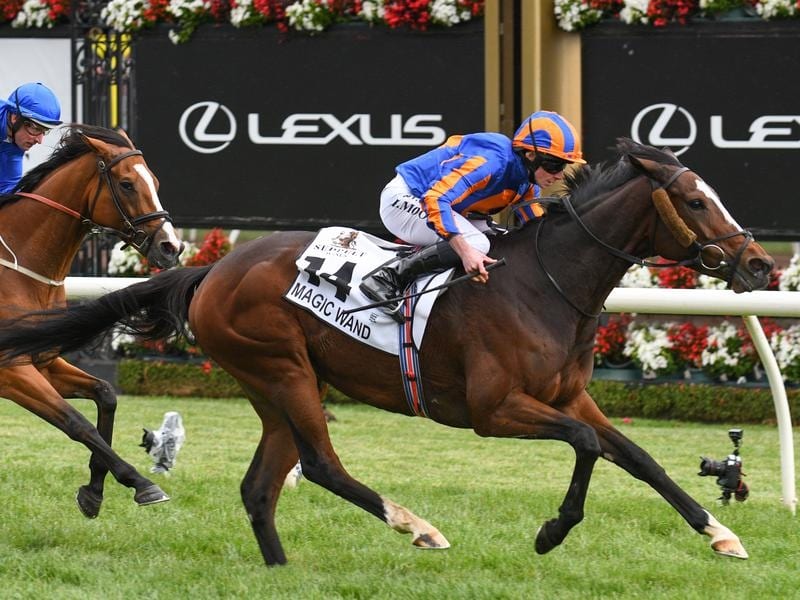 Magic Wand has won the Mackinnon Stakes, the final Group One race of the Melbourne Cup carnival.

Dropping sharply in distance after contesting the Melbourne Cup, Irish mare Magic Wand has landed her first Group One win in the Mackinnon Stakes at Flemington.

The win by the Aidan O’Brien-trained mare denied Godolphin a fairytale ending with Hartnell finishing in third place after taking the lead early in the straight.

Jockey Hugh Bowman said Hartnell was brave in defeat, adding that if Magic Wand had not been in Saturday’s 2000m weight-for-age the nine-year-old may have bowed out a winner.

“It was a superb effort, he’s such a warrior,” Bowman said.

Ryan Moore on Magic Wand stalked Hartnell before taking over with 200m to run and while Hartnell rallied he was no match in the run to the line.

Until 2016 the Mackinnon Stakes was run on Victoria Derby Day and used as a lead-up to the Melbourne Cup three days later.

Magic Wand became the first horse to run in the Mackinnon Stakes after contesting the Melbourne Cup.

“In the Melbourne Cup she’s run a good race, it was a good piece of work (for today),” O’Brien’s travelling foreman T J Comerford joked after the victory.

Magic Wand finished 10th in Tuesday’s Cup and Comerford said O’Brien had no hesitation in running the mare again on Saturday.

“I told Aidan that she ate up well on Wednesday morning and that was when we had to nominate,” Comerford said.

“Aidan said if she’s eaten up and done well then run, so it wasn’t unexpected.

“That was her third run (in Australia) now and that’s the best ground she’s got she’s been on here.

“I think after the Melbourne Cup there was plenty of life in her, she still had the gas.

“Probably a lot of people would mind her for a couple of weeks but when they’re that well, she’s telling you she’s ready to run.”

“I would say this is it for the year but the plan is to keep her in training next year.”

Jamie Richards, trainer of the runner-up Melody Belle, who was aiming for her 11th Group One win, was full of admiration for his mare.

“Full credit to Coolmore and their team to come back from a Melbourne Cup, it was a great training effort,” Richards said.

“But our horse loses no admirers and I’m really proud of the job the staff has done.

“We’ll take her home and give her a break and come back in the autumn.”