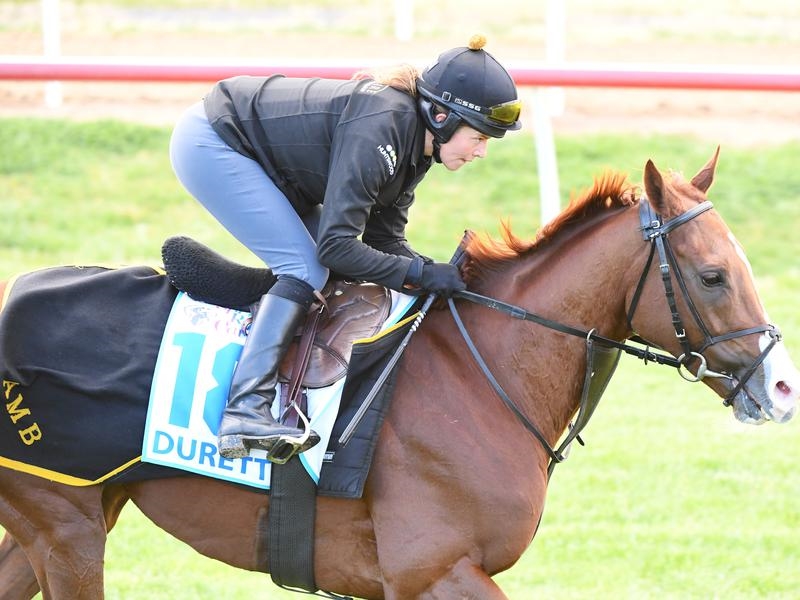 Duretto, the fourth placegetter in the 2018 Caulfield Cup, is ready to resume after an injury.

Matt Cumani is not getting ahead of himself but hopes comeback galloper Duretto could be a horse that boosts his stable’s profile in some of Melbourne’s big spring staying races.

Duretto ran fourth in last year’s Caulfield Cup (2400m) in his first Australian start when he was prepared by English trainer Andrew Balding.

Melbourne Cup plans were later dashed when Duretto was ruled out with a stress fracture in a fore leg.

Duretto has joined Cumani’s stable at Ballarat and the trainer said the eight-year-old gelding, who did not require an operation for his injury, has had a trouble-free build-up since joining his team.

Duretto steps out for Cumani in Saturday’s Nitto Denko Handicap over 1600m at Caulfield.

It is a stepping stone to longer targets and Cumani, who also has Sylpheed in the race, is hoping to see an encouraging return.

“We haven’t had a single problem (with his preparation),” Cumani said.

“We’ve had to get clearance from the vets and the stewards to race obviously, as they do with every horse that’s had a major injury, and we’ve managed to hit every one of their targets without any issues.

“So that’s certainly been a little victory in a way.

“Hopefully if we can continue in that sort of vein into his races then hopefully we’re in for a good prep.

“He’s not the type of horse that comes out and wows you with every piece of work.

“He’s a bit of a typical dour stayer and you just have to hold your nerve a little bit and have faith in his form.

“The horse looks good. He seems happy and I hope that when he gets to the races and he comes under pressure, that’s when we’ll really see him at his best.”

Given Duretto’s Caulfield Cup showing and his previous European form, Cumani is thrilled to have the stayer.

“I’m trying to keep calm and level-headed about it but he could be fantastic for us,” he said.

“He’s exactly what every young trainer wants in a stable.”

Cumani plans to run Duretto in a couple of open handicaps before the Listed Ansett Classic (2400m) at Mornington in September on a path towards the Cups.