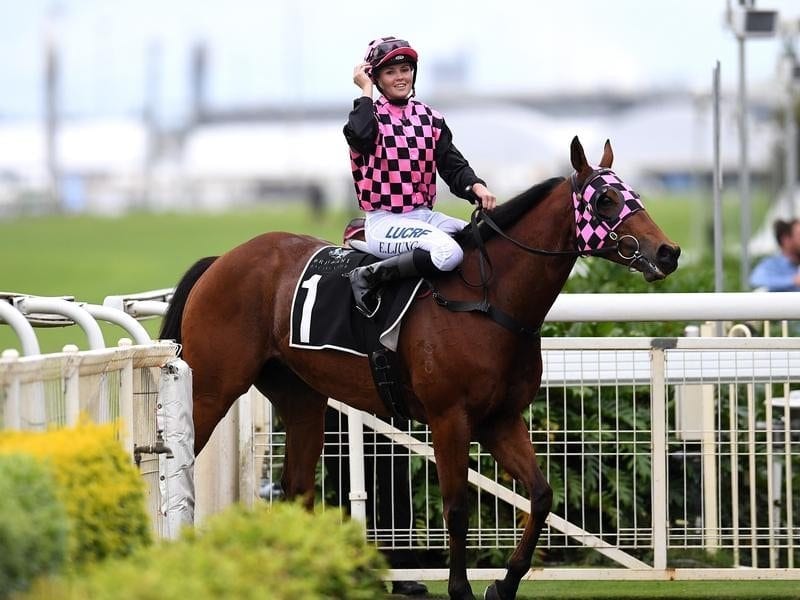 Hopfgarten has won his comback run in the Bartons Open Handicap at Doomben.

Hopfgarten has defied an amazing betting drift to score a first-up win at Doomben.

Hopfgarten opened at $5 on Saturday but drifted to $10 before beating Supreme Effort ($3.80) by three-quarters of a length in the Bartons Open Handicap (1200m).

Hopfgarten, who has won up to Group Three races, was having his first run since failing in top company during the winter.

But Heathcote engaged a 2kg claiming apprentice in Emma Ljung and gave Hopfgarten a jump out on Wednesday.

“I think he was flattened in the winter after running in the Victory Stakes on a heavy track,” Heathcote said.

“But he is back to his best and it will be into the summer, where we will chase the Villiers at Randwick and the Bernborough Handicap at Doomben.”

The win gave Heathcote a treble after his victory with Zafonic Dancer and No Annamossity.

Trainer Darryl Hansen finally got his wish to start Urban Knight ($11) over 1600m and it was rewarded with a win in the Iona Old Boys Open.

Urban Knight gave former star apprentice Luke Tarrant a welcome change of luck when he burst through to beat Man Of His Word ($5) by a neck, with another long head to Emphasis ($19) in third place.

Trainer Bruce Hill was pleased with the run of Man Of His Word, who is now heading south for the Melbourne carnival.

Trainer Ben Currie had to survive a protest to continue his good run after Now You See ($5) scored by a nose in in the Harcourts Green Living Handicap.

Tony Sears, the trainer of runner-up Hot Gossip, lodged a protest alleging the winner caused interference at the 300m but stewards threw it out.

It was Currie’s eighth winner for the week and gave apprentice Michael Murphy his first city winner since returning from a short stint in Sydney.

Jockey Luke Dittman completed a winning double on Ice Frost ($5) and was then stood down for the remainder of the day due to exhaustion.