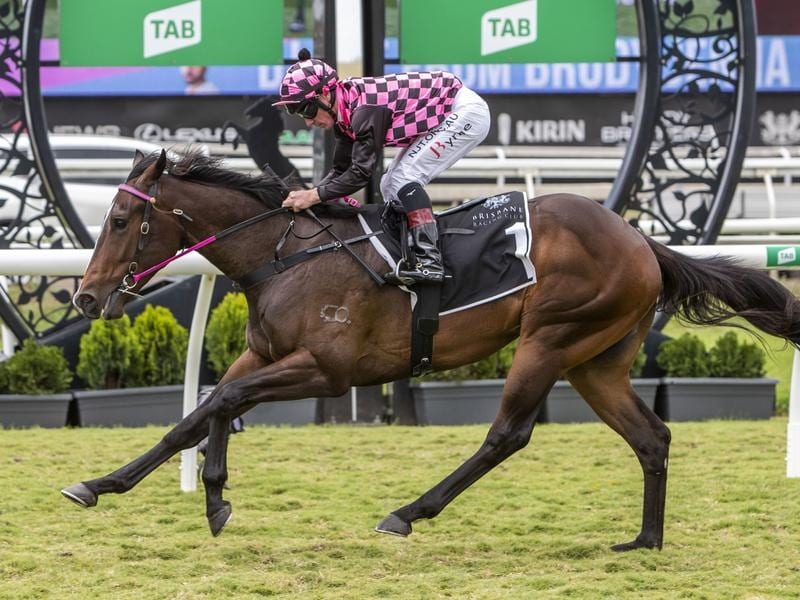 Trainer Robert Heathcote has some bad news for rival trainers who may have been hoping star two-year-old Rothfire had started to train off since his last-start win.

Rothfire made it three wins from three starts when he strolled home by 4-1/2 lengths to win a two-year-old handicap at Eagle Farm last Saturday week.

He will start one of the shortest priced favourites at a Brisbane metropolitan meeting in years in the $125,000 Two-Year-Old Colts and geldings The Jewel Prelude at Doomben on Saturday.

The shortest priced favourite to win a race in Brisbane was subsequent Group One winner General Nediym who started 25-1 on ($1.04) at Eagle Farm in December 1996.

Rothfire will not start at those cramped odds but most bookmakers have him $1.20 for Saturday’s race.

Heathcote was in Launceston this week as a guest at his hometown Cup but kept a long-distance eye on Rothfire.

“I have been monitoring him daily through my staff and I have some bad news for anyone who was hoping he has gone backwards since Eagle Farm,” Heathcote said.

“If anything he has taken another step up. His work on Tuesday morning was very strong.”

Heathcote has made it clear he has a huge opinion of Rothfire but knows too well the vagaries of racing.

“I have never said this horse is another future Group One horse like Buffering. But what I have said is that he reminds me of Buffering in the things he can do,” Heathcote said.

“He has won two of his starts by big margins but in his other win he had to show a lot of courage to beat a pretty smart filly in Gotta Kiss.

“He had to climb off the canvas to beat her and that is the mark of a good horse.”

“We have put in a nomination for the ATC Sires’ but we just want to see how things go here first before any talk of Sydney,” Heathcote said.

The trainer also has a chance with Jellishot in the fillies division of The Jewel Prelude on Saturday.

Jellishot had trialled well before failing at her first start. She was then second at Eagle Farm three weeks ago when ridden off the pace.

“There isn’t much between Jellishot and Bellissimi Amici who won last week,” he said.

“I have put blinkers on her and she has barrier three.

” If Jellishot races well she can go on to the Jewel as well.”