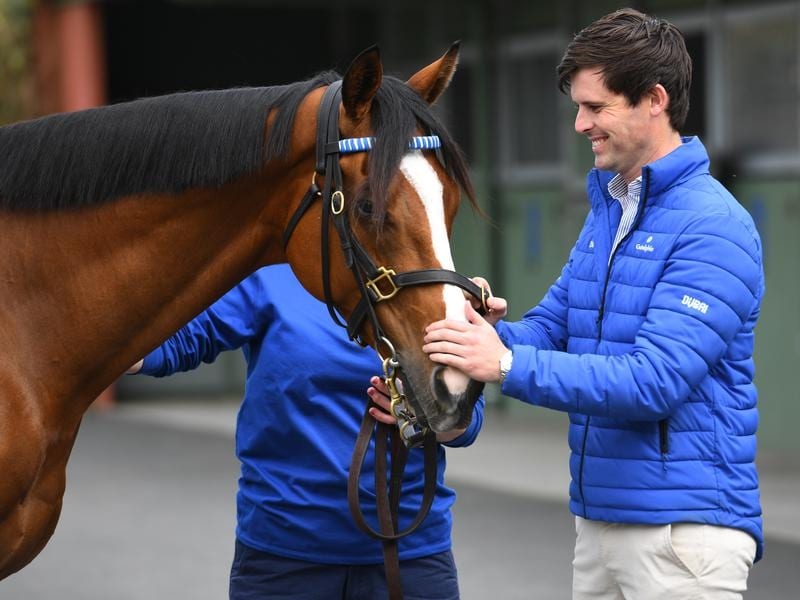 Trainer James Cummings and stable warhorse Hartnell who lines up in the Underwood Stakes.

Godolphin trainer James Cummings rates defending titleholder Homesman as the horse to beat in the Underwood Stakes but believes the race presents as a great opportunity for his stable’s “gladiator” Hartnell.

The Lloyd Williams-owned, Liam Howley-trained Homesman is $2.80 favourite for Sunday’s Underwood (1800m) at Caulfield after making an impressive season return with victory in the Feehan Stakes at The Valley on September 7.

But nine-year-old Hartnell has firmed from $6 to $4.60 with TAB fixed odds and Cummings believes the gelding has had the right preparation to once again figure prominently in a feature weight-for-age race.

Hartnell is yet to win this campaign but has been competitive with a third in the P B Lawrence Stakes before fourths in the Group One Memsie Stakes (1400m) and Group One Makybe Diva Stakes (1600m).

“Homesman will be hard to beat in that race, I thought he was really impressive in the Feehan,” Cummings said.

“But Hartnell’s form is solid.

“He was good again in the Makybe Diva and up to 1800 metres now looks like it will suit him nicely. He looks like being another one of the top four chances in that race.”

In a 54-start career which began in England before he was imported to Australia in the 2014/15 season, Hartnell has won 13 races with another 21 placings and more than $7 million prize money.

Cummings said Hartnell should be perfectly conditioned for the Underwood.

“Three solid runs this preparation suggest there is enough vigour for yet another killer blow from this gladiator,” Cummings said.

“The Underwood this year is looking like a race that will suit him and give him a great chance to add another Group One to a truly great record.”