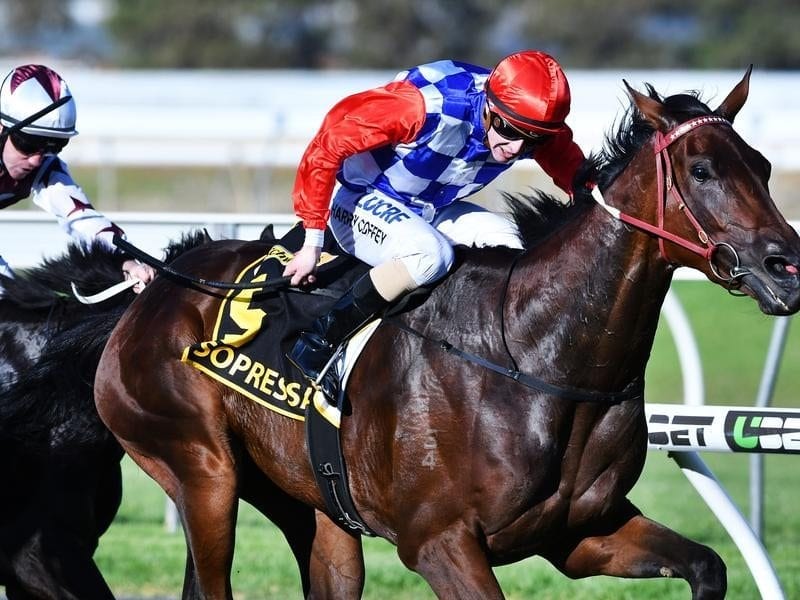 Harry Coffey has celebrated his first Group One win aboard Sopressa in the Australasian Oaks.

Harry Coffey has claimed an emotional win in the Australasian Oaks at Morphettville, his first at Group One level, aboard Sopressa for long-time supporter and friend, trainer Darren Weir.

Coffey, 22, has overcome adversity to follow his dream to be a jockey, undergoing regular treatment throughout his life for cystic fibrosis.

Saturday’s win was also an emotional one for Weir, who began his stellar career in racing with Harry’s father, trainer Austy Coffey, who’s based at Swan Hill in country Victoria.

“For Harry to even be riding and for me to give him his first Group One winner is great,” Weir said.

“The Coffey family has been unbelievable to me all through my career.

“It’s been told before but that’s how I got into racing – with Austy Coffey.

“Obviously I’ve known Harry ever since he was born and followed his illness as well.

Sopressa ($6.50) was handy throughout Saturday’s 2000m race and stormed home inside the final 100m to beat Sheezdashing ($16) by a neck, with Miss Admiration ($26) another half-head third.

The $5 favourite, Savacool, finished seventh while Kerrin McEvoy’s mount, Jungle Fish, was a late scratching after flipping over in the barrier.

Coffey said he found it hard to express what the win meant.

“And to do it for Darren Weir. He’s known me all my life.

“I can remember as a little kid him visiting me in hospital.”

Coffey said he was looking forward to returning home to celebrate with his family and girlfriend.

“They rang me last night. They were more nervous than me.

“They left me here by myself because they didn’t want to put any pressure on me.”