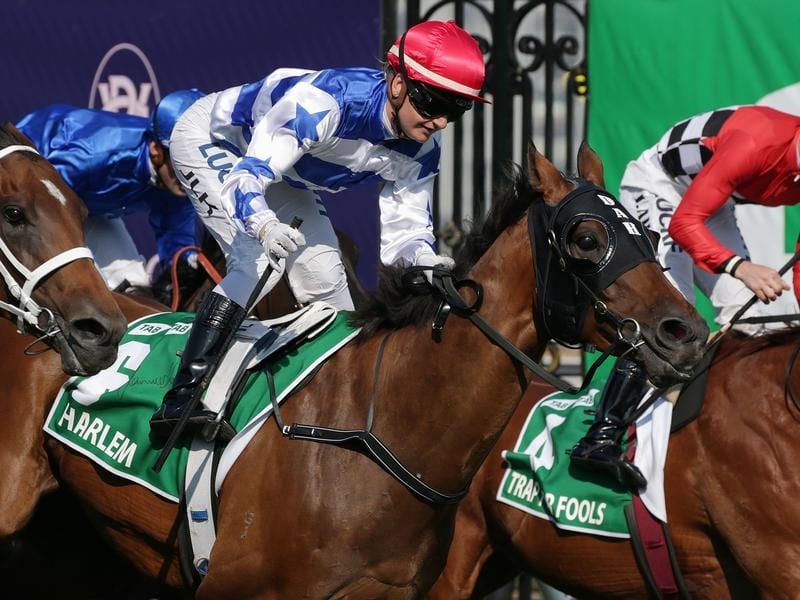 Dual Australian Cup winner Harlem (red cap) will be tried over 2400m in the Mornington Cup.

Despite the fact dual Australian Cup winner Harlem has not won this preparation, his co-trainer Tom Dabernig is adamant he is going as well as he ever has for Lindsay Park.

Whether that can translate into victory in Saturday’s Mornington Cup, Dabernig is unsure.

Harlem won the 2018 and 2019 Australian Cups over 2000m and was attempting the hat-trick two weeks ago when fourth behind Fifty Stars.

Dabernig, and his co-trainers David and Ben Hayes, watched Harlem perform strongly in lead-up races to this year’s Australian Cup and were equally delighted with his performance.

In previous years Harlem has headed to Sydney after the Australian Cup but flopped, so the stable decided to keep him in Melbourne to try him at 2400m on Saturday.

Even though Harlem was successful at that distance in Europe, Dabernig is not convinced Harlem is a stayer but is happy to be proven wrong.

‘He’s got mile-and-half form overseas but his 2400-metre form in Australia has probably not been his best distance,” Dabernig said.

“But there have also been other factors.

“His Sydney form for whatever reason is average and his wet track form is average.

“We’re thinking drawn that gate (2) he likes to sit in a box-seat position and being on dry ground with the grounding for a mile-and-a-half, if we’re going to do it, it might be the day.

“But I go in with a bit of a reserved view because a couple of times he has been a bit disappointing.”

Saturday’s Mornington Cup carries the added bonus of a guaranteed Caulfield Cup start for the winner.

In recent years Kings Will Dream, the 2018 winner, is the only horse to have taken up the challenge, finishing sixth in the Group One race in October.

The Caulfield Cup is far from Lindsay Park’s mind with the stable wanting the gelding to continue his recent run of form.

“Every run has been solid this time and he seems great in himself,” Dabernig said.

Harlem will again be ridden by Jamie Kah who is among a group of jockeys opting out of the 25 to be segregated in Victoria.

From Sunday, the 25 will only be allowed to ride on race days as authorities try to keep coronavirus contained as racing continues behind closed gates.