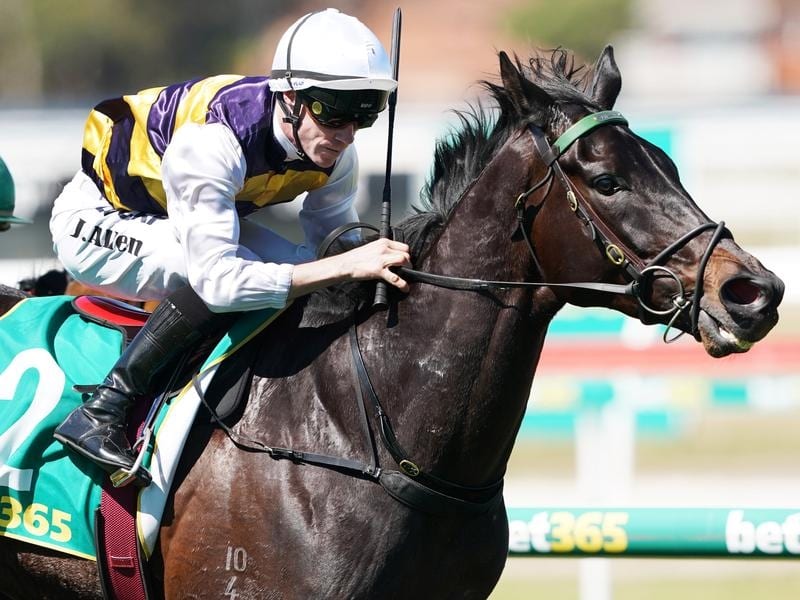 Unbeaten Harbour Views is on his way to the Melbourne Cup carnival after winning at Geelong.

Unbeaten Harbour Views is set to race for a rich prize over the Melbourne Cup carnival after scoring in a qualifying race at Geelong.

The Warrnambool-trained gelding is now set to run in the $500,000 Melbourne Cup Carnival Country Final at Flemington on November 7.

The race is restricted to country-trained horses and is a benchmark 80 handicap over 1600m.

Trainer Matthew Williams has had the race in mind since the French-bred import completed a successful first campaign at Swan Hill in June.

Harbour Views returned with victory at Caulfield last month and needed to finish first or second in Wednesday’s Geelong Australia MCC Country Series Heat to book a place at Flemington.

With John Allen in the saddle, Harbour Views was ridden closer to the lead than normal and applied pressure to his main opponent Impi early in the straight before running out a comfortable winner.

Williams said there was improvement to come from Harbour Views heading to Flemington after the gelding appeared to stargaze late in the race.

“He’s got that little bit of x-factor about him,” Williams said.

Williams hopes the Flemington race will precede a trip to Perth for the Group One Railway Stakes on November 23 and the Kingston Town Classic two weeks later.

“I like the idea of running him over a mile and the 1800 metres in Perth and using Lindsey Smith’s stables and environment over there,” Williams said.

“We know he travels well and it could be a trip that really helps him.

“But other options could be the Ballarat Cup or even the All-Star Mile in the autumn.”