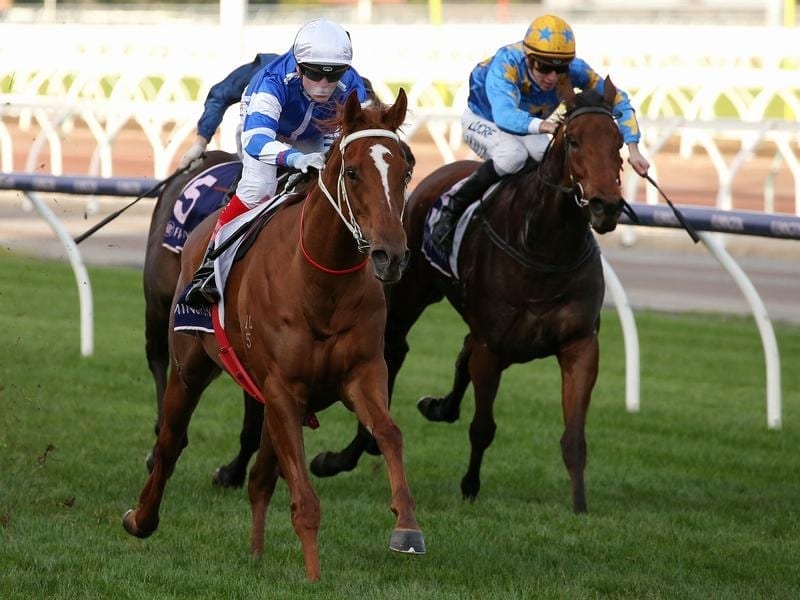 Gytrash has easily accounted for a handy field of three-year-olds.

Promising South Australian sprinter Gytrash has capped his preparation with a dominant win in a listed race at Flemington that his trainer Gordon Richards admits was an afterthought.

After winning at the same track two weeks ago, Gytrash easily accounted for a handy field of three-year-olds in Saturday’s A R Creswick Stakes over the straight 1200m course.

Richards admitted he had not initially planned to extend Gytrash’s campaign past the Group One Goodwood in Adelaide last month, in which the three-year-old was unplaced for the first time in his career.

But he is glad he did.

“It was a bit of an afterthought to come here,” Morphettville-based Richards said.

“We were going to turn him out for a break after The Goodwood but he just keeps getting better every start.

“He’ll have a short spell and come back for the spring carnival as a four-year-old.”

With champion jockey Craig Williams aboard for the first time, Gytrash ($3.50) raced in a prominent position throughout and kicked clear over the final 300m to beat Golden Halo by 2-1/4 lengths with a short neck to Bam’s On Fire third.

Gytrash has now won six of his 13 starts to go with another six placings and Williams, who chased the ride for Saturday’s race, believes connections have nice options for the galloper in the spring.

“When he walked into the yard today I was really taken by his appearance.

“He was strong, solid and even though he had 59 kilos he was actually well-weighted today.

“I love the way that he raced. He got lost on a couple of occasions but when it mattered he really quickened up.”

Gytrash was one of two winners on the day for Melbourne’s premier jockey along with the Chris Waller-trained Sure Knee, while Jye McNeil also rode a double aboard Rubisaki and Come On Carl.

McNeil’s double took his metropolitan tally in Melbourne to 18 for the season but more importantly brought up a milestone of 100 wins nation-wide for him this season, the first time the 24-year-old has achieved the feat.