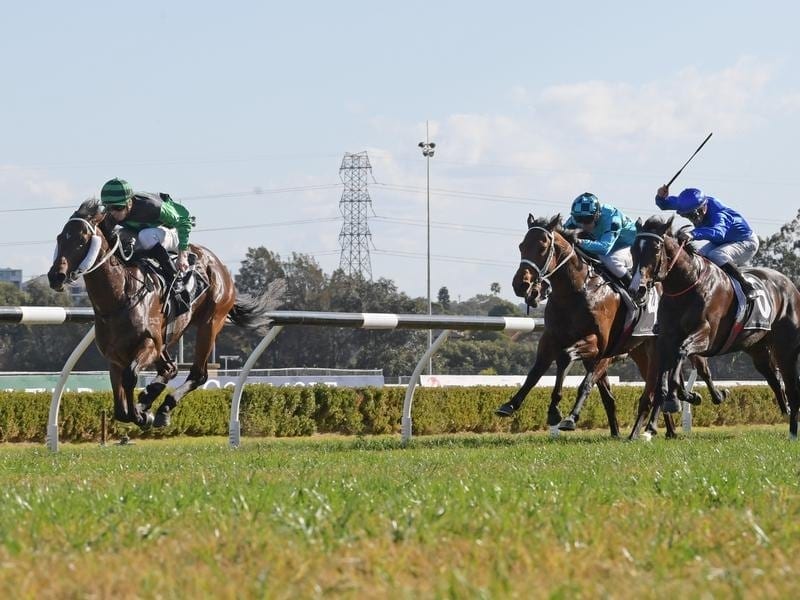 Canterbury debut winner Golden Tycoon steps up to Listed class in the Rosebud at Rosehill.

What Golden Tycoon lacks in race sense he makes up for with an abundance of speed.

Whether that is enough to get him over the line in Saturday’s Listed Rosebud at Rosehill remains to be seen but his trainer Greg McFarlane believes he has a future Group One performer on his hands.

Golden Tycoon ran his rivals ragged on debut at Canterbury on July 25 in a 1200m-race in which Maid Of Heaven was considered unlucky.

The Mark Newnham-trained filly won at Canterbury on Wednesday but McFarlane said she and the others had had their chances to beat Golden Tycoon two weeks earlier.

“The biggest chink in his armour is his lack of racing nous,” McFarlane said.

“At Canterbury he was on his wrong leg going round the turn and it wasn’t until he straightened up that he changed legs and got back on his right one.

“The others had the chance to get past him when he was doing things wrong and they couldn’t.

“No-one really took him on. I’m hoping eventually he will learn to sit back a bit and accelerate to the line.

“But I’ll leave it all up to Jason (Collett) what he does when he jumps out on Saturday.”

McFarlane has not completely ruled out next month’s Group One Golden Rose over 1400 metres with the Coolmore Stud Stakes over the Flemington straight 1200 metres in November another option.

“It depends what he does on Saturday,” he said.

“I think he will get 1400 metres no risk. He’s not in the nominations for the Golden Rose but it’s still an option and if we go that way we can pay a late entry.”

Golden Tycoon was at $13 on Thursday with Godolphin colt Plague Stone the TAB’s $2.60 favourite ahead of the Kim Waugh-trained Oxford Tycoon at $4.20.

Plague Stone, who finished second to eventual Blue Diamond Stakes winner Written By in the Prelude to the Group One race in February, began his campaign with a strong win in the Rosebud Prelude (1000m) on July 21.

“Plague Stone has been bottled up and held together as we proceed second-up to the Rosebud,” trainer James Cummings said.

“He continues to look very sharp since his strong win over five furlongs a few weeks ago and looks set to let down strongly yet again in what looks another suitable race early on in his campaign.”