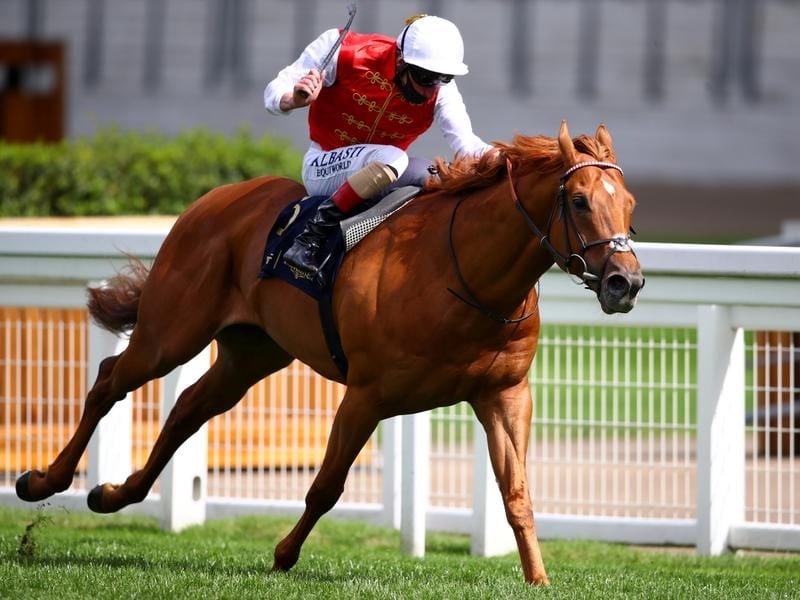 Adam Kirby has ridden Golden Horde to an emphatic victory in the Commonwealth Cup at Royal Ascot.

Clive Cox’s colt, a Group Two-winning juvenile before finishing second in last year’s Middle Park Stakes at Newmarket, marked his seasonal return at the top level with a length-and-a-half triumph in the feature race on day four on Friday.

“I’m very proud of him. He’s a lovely big, strong horse. He was a wonderful two-year-old, but with the size and scope he had we were always hopeful that when he strengthened into his frame he’d improve again,” Cox said.

“To win a Group One first time out with any horse is very special. A Commonwealth Cup means an awful lot, so hopefully he can carry it on.

Adam Kirby had the 5-1 victor handily placed behind the pace set by Mums Tipple, before pouncing in the final two furlongs to win with authority.

American filly Kimari, sent off at the same price as the winner, had to settle for second place for the second year in succession at the famous meeting – having finished runner-up for Wesley Ward in the Queen Mary Stakes 12 months ago.

Ventura Rebel stayed on into third at 50-1, two and a half lengths further back.

“He’s a proper horse and he’s done nothing but improve. He strengthened up very well over the winter,” Kirby said.

“He’s very quick, but hits the line very strong over six furlongs. I can’t see any reason why we would change it.”

Asked how he compares to previous sprint stars he has ridden, including Lethal Force and Harry Angel, Kirby said: “He’s quite a special horse.

“I’ve been lucky to ride a lot of very good sprinters and in my book, this lad is right up there. I think it would be a very brave statement to say he’s the best I’ve ridden, but he’s extremely talented.”