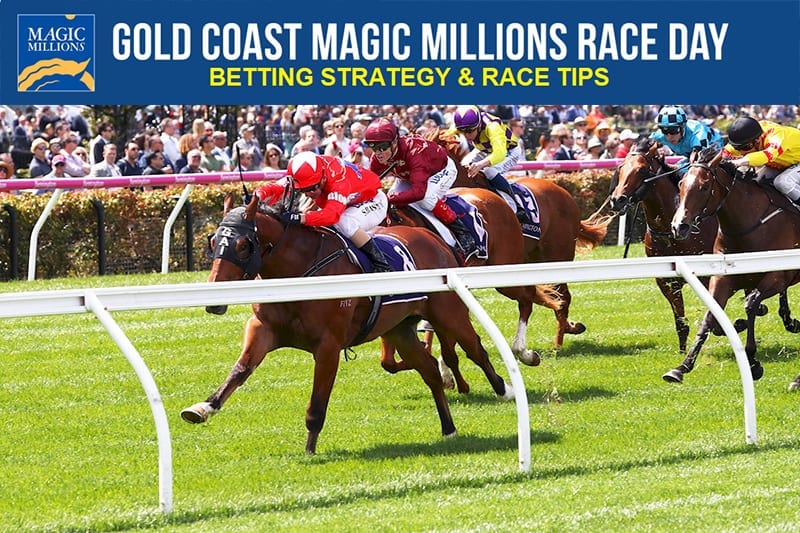 THE Gold Coast Magic Millions Race Day is finally upon us and the team at Horse Betting HQ has been buzzing.

Could we see the next Winx among this batch? There’s no telling where these juvinelle runners will end up down the track so sit back and enjoy the show.

Our expert has run his eye over all nines so you didn’t have to. Take a look at the tips below for what promises to be one of the most exciting race days of the year.

Terminology has been knocking on the door of a win this preparation and looks well suited to breaking through here.

This campaign the filly has placed second twice over three runs including a length and a half defeat in the Gosford Guineas as a double figure outsider. From a middle draw here the Waterhouse and Bott runner should be well suited to delivering a breakthrough win.

Miss Toorak Flyer is a mare with a a ton of upside, as evidenced by a strong resuming win at Cranbourne over the 1000m on November 30. Since that run she went to Randwick and finished less than half a length away from Deprive in a strongly ran race as a $19 outsider.

This race looks nice for her and we’re backing her in to deliver.

A wide barrier is the only concern here for consistent type Mishani Bullitt, who can surprise in this one.

A record of four wins and nine placings from 25 starts suggests this horse is more than capable, and in a field where nothing really stands out we’re expecting a strong showing.

The horse will appreciate the drop in weight and will be hard to beat over the 1300m.

Tally was brilliant in his last-start win at Doomben, spearing out early and sustaining strongly to the line to win the Magic Millions Shootout Quality.

The win was the second in three starts for the Godolphin runner, who reunited with Brenton Avdulla. Avdulla has a strong success rate with the James Cummings stable and we’re anticipating another solid showing.

No stranger to this meeting, Houtzen comes into the 2019 Gold Coast Magic Millions as one of the best bets of the day.

After winning from start to finish at Doomben last-start, Houtzen is better placed from barrier nine to be inserted straight onto the pace, and Jeff Lloyd retains the ride which is also a huge bonus.

Houtzen is the best bet of the day on 2019 Gold Coast Magic Millions race day.

Godolphin runner Manicure should produce another strong performance for the stable in the sixth event on the card.

The horse resumed in style at Doomben, winning by a length and a half under Larry Cassidy. This time James McDonald takes the ride, which is a big tick for the mare.

Manicure has a great second-up record of a win and a second placing from two attempts and this should be a walk in the park for the mare.

Outbark Barbie is the class horse in this field and looks extremely hard to beat.

While a last-start fifth as an even money favourite was less than ideal, the horse was black booked by us last year after a slashing run in the Magic Millions 2YO Classic, where she finished third behind boom filly Sunlight.

Outbark Barbie should be far too good for this lot.

We’ve been high on Unite And Conquer since his brilliant debut win at Flemington on October 6 last year and we were thoroughly impressed with the Wyong Magic Millions 2YO win back on December 12.

Many thought he laboured slightly towards the end of his run but we think there’s plenty more left in the tank for the Waterhouse and Bott-trained superstar in making.

After Yes Yes Yes was scratched from the race we couldn’t see anything troubling Unite And Conquer. Back him in.

We’re going for a bit of value in the final race on the card.

Last-start winner Sold For Song won at huge odds at Doomben back on December 29 and has been let up ever since. Prior to the win the horse had been highly competitive, placing in three-straight races.

The pattern should be that Sold For Song goes back and runs over the top of them, and we’re expecting exactly that.