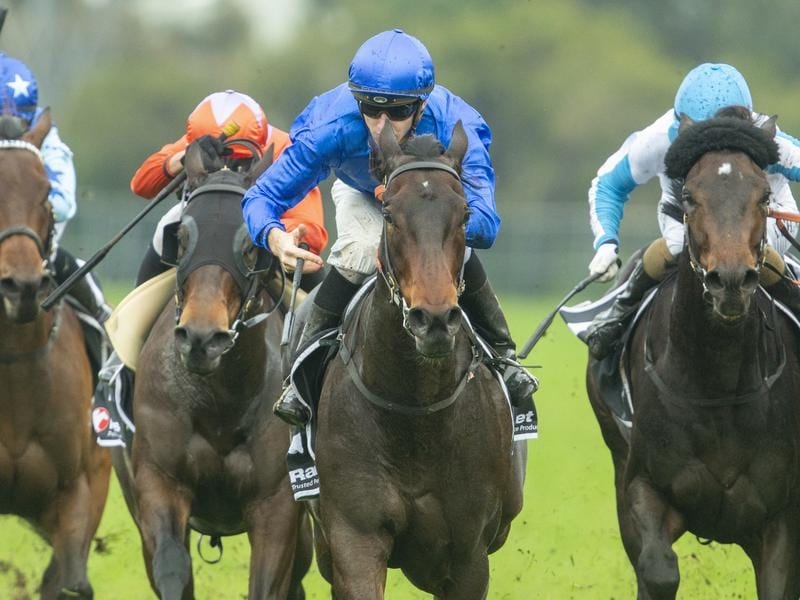 Varda (centre) has continued a profitable run for jockey Jason Collett in winning at Rosehill.

Improving filly Varda has put herself in the mix for a spot on Godolphin’s spring carnival team and continued jockey Jason Collett’s sparkling vein of form.

The three-year-old was rising to Saturday company after a facile victory against older horses first-up at Canterbury, showing great determination to land the Ranvet Handicap (1100m) at Rosehill.

Godolphin’s representative Darren Beadman says Varda has the sass and ability to develop into a black-type mare.

“It was a very positive ride by the jockey and a fantastic win by the filly,” Beadman said.

“She has got a little bit of attitude about her and she showed that aggression at the furlong when she was in for the fight.

“You’re going to have a fit filly going into the early part of the spring so she might pick up a nice little stakes race.”

Race leader Lillemor skipped clear in the straight and Varda ($2.70 fav) dug deep to chase her down and race to a 1-3/4 length win.

It is the third Saturday meeting in succession that Collett, who describes Varda as “push-button”, has landed a double after he earlier piloted the Matt Dunn-trained Rothenburg to victory in the Highway Handicap.

The Murwillumbah-based trainer has been utilising eight visitor’s boxes at Rosehill during the COVID-19 pandemic but was this week advised by Racing NSW he must relinquish those or lose his status as a country trainer.

He has decided to maintain a Sydney presence meaning he will no longer be eligible to have Highway runners, Rothenburg his 26th and final winner in the country-restricted races.

“”While we’ve got horses good enough to maybe get to the next level or be competitive, you have to at least give them a chance,” Dunn’s wife Keira said.