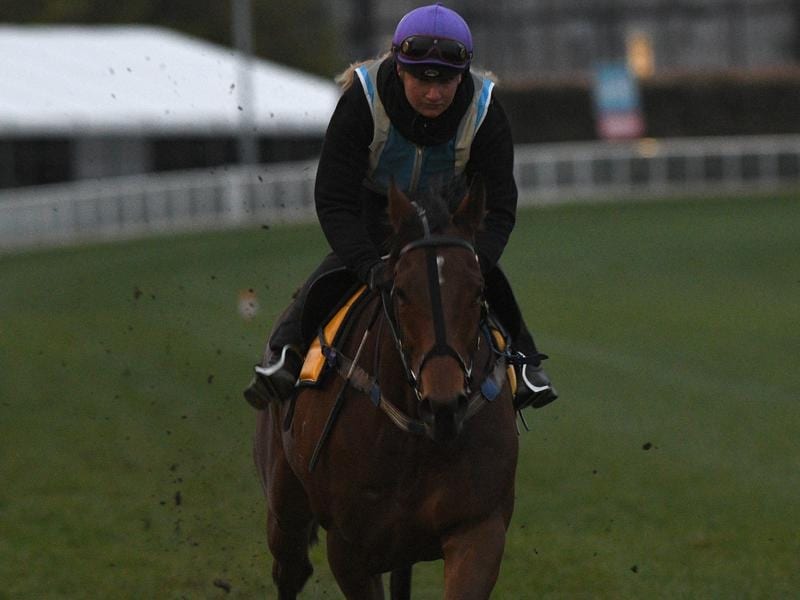 Gatting has had a trackwork session at Caulfield ahead of his next Group 1 tilt in the Underwood Stakes.

Having secured one Group One prize in Melbourne, Perth trainer Darren Mcauliffe is eyeing off another with Gatting at Caulfield.

Gatting runs in Sunday’s Underwood Stakes (1800m), another stepping stone towards his main target, the Cox Plate at The Valley on October 26.

A shock $101 winner of the Makybe Diva Stakes at Flemington at his Melbourne debut, Gatting is currently listed the $5 second pick for Sunday’s race.

Mcauliffe could not believe Gatting got under the guard of eastern seaboard form analysts in the Makybe Diva, claiming they quickly dismiss WA form.

“I don’t think people realise how good some of these WA horses are,” Mcauliffe said.

Mcauliffe did not expect Flemington to suit Gatting’s style when he lowered the colours of Mystic Journey in the Makybe Diva, but sees a different scenario on Sunday.

The tighter confines at Caulfield ideally suit horses near the speed, a plus in Mcauliffe’s eyes after he took the gelding to Caulfield on Tuesday to get acquainted with the lay-out.

Under race rider Jamie Kah, Gatting worked over 1200m, quickening up over the final 500m.

“He improved each sectional and did it on the bridle,” Mcauliffe said.

“He had a nice little look about. We left the blinkers off him as we wanted him to absorb the environment.

“He can be a little bit fizzy at times, as we saw at Flemington, so hopefully he’s a little more chilled on Sunday now that he’s been here.”

Mcauliffe has Gatting’s program laid out with his next assignment following the Underwood, the Caulfield Stakes on October 12 before the Cox Plate two weeks later.

Stablemate Rebel King runs in Sunday’s Listed Testa Rossa Stakes (1200m) and he too galloped at Caulfield on Tuesday.

Mcauliffe said Rebel King got lost up the Flemington straight when 11th in the Bobbie Lewis Quality on September 14.

“He overdid it early and raced upside down but he’ll improve a heck of a lot going around the corner,” Mcauliffe said.