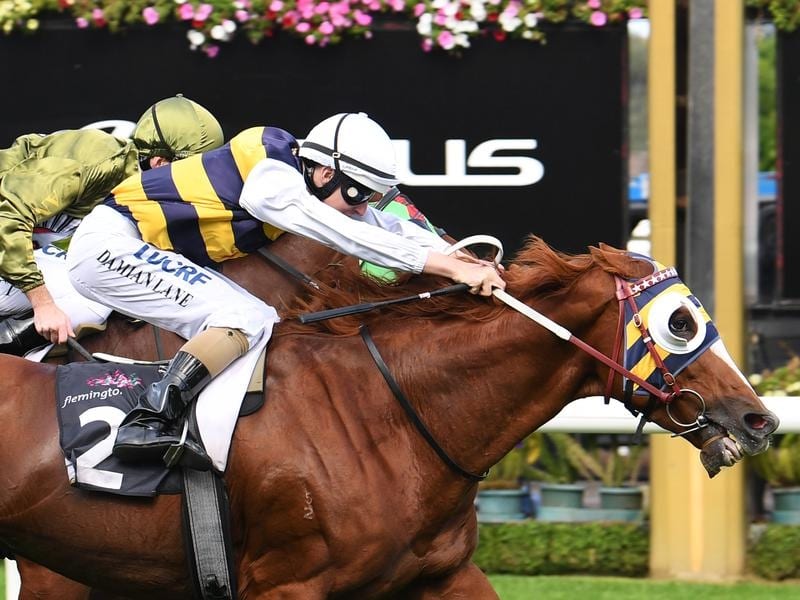 Gallic Chieftain will try to boost his chances of making the Melbourne Cup in the St Leger Stakes.

It takes a bold trainer to try to beat Chris Waller in his own backyard but that is precisely what Archie Alexander is hoping to do with Gallic Chieftain in the St Leger Stakes at Randwick.

The imported stayer almost got the job done last start when he narrowly went down to the Waller-trained Come Play With Me in the Group One Metropolitan.

The pair face a rematch in Saturday’s St Leger Stakes (2600m) in which Waller will also saddle up Patrick Erin, Carzoff and Youngstar.

“Waller is so hard to beat anywhere, never mind in Sydney,” the Victorian-based Alexander said.

“When you’re beaten a head in a Group One, it’s not the same as a win but you can’t begrudge your horse.

“He has tried really hard and done everything really well, apart from that little head.”

Alexander can make a case for Gallic Chieftain to exact revenge in the St Leger after the horse got a long way back from a wide draw in the Metropolitan and closed strongly late.

It was the seven-year-old’s fourth start in Sydney and his record, which includes a Group Two Chairman’s Handicap victory in the autumn, suggests he relishes racing in the clockwise direction.

“Before that with Darren Weir he had one run where he won the Winter Cup so basically, he’s not far off being nearly unbeaten in Sydney.”

And while it might be a pipedream, if Gallic Chieftain can raid Sydney’s prize money coffers on Saturday, a start in the Melbourne Cup will move a step closer.

The horse currently sits number 44 in the order of entry but with natural attrition and a little luck, Alexander hopes he might sneak into the field.

“Our dream scenario would be if he won here and looked like he was going to get a run in the Melbourne Cup, he would go there,” he said.