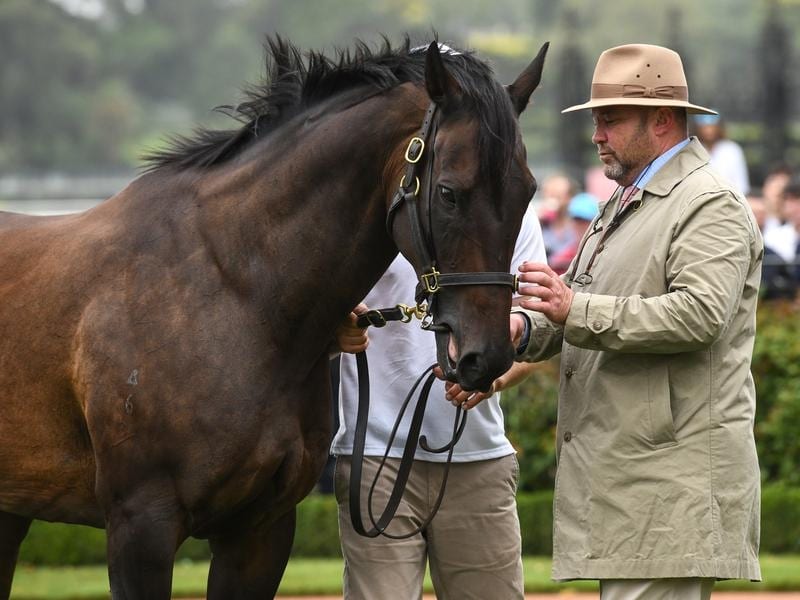 Black Caviar has dragged the Flemington crowd from the grandstands at her first race track appearance since her retirement after an unbeaten 25 start career.

Now age 13 and the mother of six foals, the mare was on parade at the Black Caviar The Great Horse themed race day on Saturday.

The meeting featured the Group One Black Caviar Lightning Stakes, a race the mare won on three consecutive occasions in 2011, 2012, 2013.

Before the running of the 1000m feature, Black Caviar was paraded in the mounting yard where her owners and their families along with trainer Peter Moody, jockey Luke Nolen, strapper Donna Fisher and trackrider Patrick Bell all gathered to have another look at the mare.

The mounting yard was lined with fans of the mare with children displaying Black Caviar placards while Victoria Racing Clubs members took vantage points in the stands to again see the mare who won eight of her 25 races at Flemington.

Black Caviar was retired after winning the T J Smith Stakes at Randwick in April 2013 with almost $8 million in prize money earned in her 25 starts.

Nick Smith, in Melbourne promoting this year’s five-day Royal Ascot meeting in June, said it was amazing to see Black Caviar again in the flesh after the mare won in front of The Queen at Royal Ascot in 2012.

Co-owner Colin Madden said it was emotional seeing the mare back at Flemington and that it brought back so many memories.

“It’s wonderful that she’s been able to come and do what she’s done,” Madden said.

“It’s nice to see her and the people come out of the stands and give her a round of applause.”

Madden has a share in Ole Kirk, the son of Black Caviar’s sister Naturale, who scored a debut win in the Listed Talindert Stakes earlier on Saturday’s program.

“To have her nephew win and do it aggressively, they were qualities she showed,” Madden said.