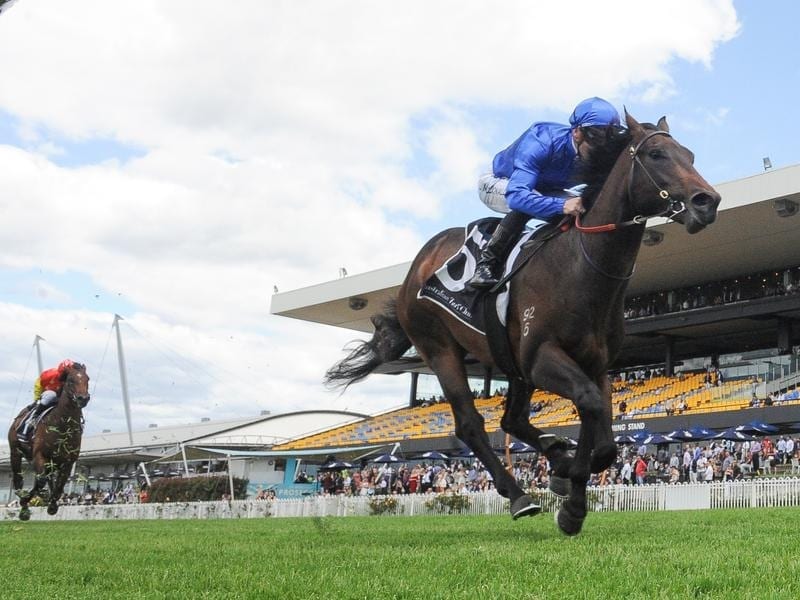 A winner on debut, Tassort has taken out Rosehill’s Golden Gift.

A sibling to Godolphin’s Group One winners Astern and Alizee, Tassort has given his sire Brazen Beau his first racetrack success in the Golden Gift at Rosehill.

Godolphin trainer James Cummings said the colt had been on an upward curve in his work and would now be given a break with the autumn races in mind.

“The horse has been such a relaxed customer up until the point when some pressure started being put on a month ago,” Cummings said.

“It is no doubt this race had a lot of build-up and he did well to pull away.”

Three scratchings reduced the field to four with Cardiff the $2.50 favourite after two barrier trial wins.

Spaceboy ($4.60) led the field but when James McDonald asked Tassort to step up a gear in the straight, the colt collared Spaceboy and drew away to win by 5-1/4 lengths.

Jonah ($4.40) was a short half head behind the runner-up with Cardiff last of the four and jockey Michael Walker saying the occasion got to him.

While Godolphin has a wealth of stallions and juveniles, Cummings said Tassort had now obviously set the standard.

“He will be the benchmark for the stable’s other young performers,” he said.

“He’s an exciting one to be put away now and prepared for next year.”

Brazen Beau was trained by Chris Waller to win the Coolmore Stud Stakes and Newmarket Handicap and also finished second in the Diamond Jubilee Stakes at Royal Ascot.