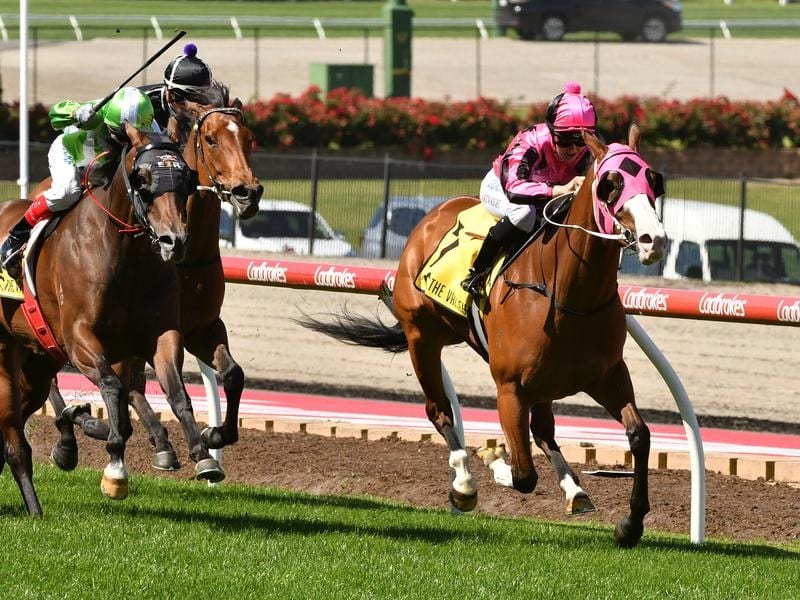 Georgina Cartwright will again ride Fill The Flute (r) when the mare returns to The Valley.

Trainer Jamie Edwards is hoping lightning strikes twice when his in-form mare Fill The Flute returns to The Valley.

Fill The Flute is nominated in two races at The Valley on Saturday, both over 1000m, a benchmark 84 race for fillies and mares and the open handicap.

Edwards has opted for the fillies and mares race, the same race Fill The Flute won at the corresponding meeting at The Valley 12 months ago.

That day Fill The Flute landed a betting plunge, firming from $4 to $3.20 and in the process extending her winning sequence to four.

Fill The Flute has been successful in two races since, winning at Morphettville in July and at her latest start on heavy ground at Cranbourne on November 8.

“It would be nice if she could do it again,” Edwards said.

“But she’s going to be carrying a bit more weight this time though.”

Fill The Flute was ridden to victory in last year’s race by apprentice Georgina Cartwright who again has the ride on Saturday.

Cartwright’s claim of 3kg reduced Fill The Flute’s weight to 53kg 12 months ago, but this time around Cartwright will claim only 2kg and the mare will carry 57kg.

“That could be a bit of a difference,” Edwards said.

“She’s come through her last run really well and she galloped up well this morning so I expect her to go well on Saturday:”

With $125,000 prize money up for grabs, Edwards said Saturday’s race comes at the right time for Fill The Flute.

“She seems that next tier down so it’s her chance now to run in some nice races,” Edwards said.

“So this is what we specifically targeted her at. We thought we could ease our way through the spring and have her 100 per cent off the back of the spring and that’s where we’re at.

“We’re still racing for good prize money, so we’ll try and make the most of it.”