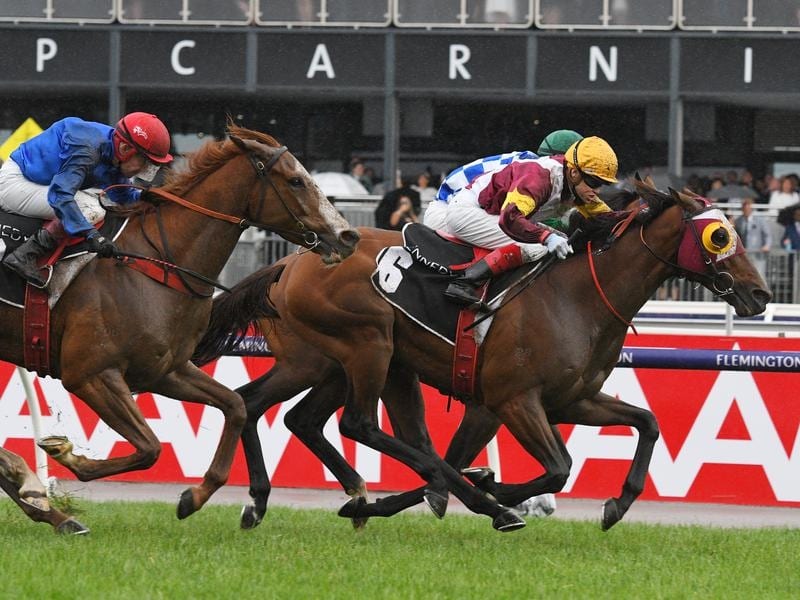 Fierce Impact (gold cap) will put his All-Star Mile hopes to the test in the Chipping Norton.

The winner of the Toorak Handicap and Cantala Stakes in Melbourne in the spring, Fierce Impact made an impressive return when second in the C F Orr Stakes to three-year-old Alabama Express.

Trainer Matthew Smith hopes a good performance in the Group One Chipping Norton Stakes will be enough to get the horse into the $5 million All-Star Mile.

Fierce Impact was galloped on during the Orr but has since won a barrier trial at Hawkesbury in preparation for Saturday’s 1600m-feature.

“He just had a couple of superficial cuts on a hind leg,” Smith said.

“He was over it quickly and won his trial well.

“He is a happy horse and in a good space so I expect him to go well again.”

Brenton Avdulla rode Fierce Impact in the trial and takes the ride on Saturday.

Smith said he and the horse’s owners considered Saturday’s Futurity Stakes won by Streets Of Avalon because it offered the winner a ticket to the All-Star Mile at Caulfield on March 14.

“We thought about the Futurity but decided to stay at home for the Chipping Norton,” Smith said.

“If he goes as well as I think he will, then I hope he gets one of the wild cards into the race.

“But the Chipping Norton won’t be easy looking at the nominations.

“It could turn out to be the best field he’s been in yet.”

The Jamie Richards-trained Te Akau Shark is the favourite in early Chipping Norton markets after claiming his first Group One win in his native New Zealand earlier this month.

Te Akau Shark created a big impression in Australia in the spring with his second to Kolding in the Epsom Handicap and third in the Cox Plate behind Lys Gracieux and Castelvecchio.