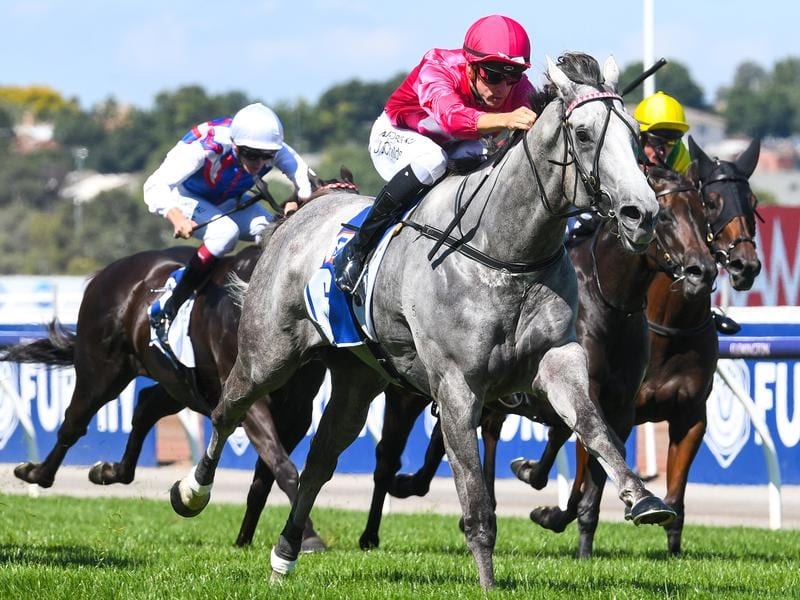 Fabergino’s win in the Listed Bob Hoysted Stakes at Flemington was her eighth win from 11 starts.

Speedy West Australian mare Fabergino has delivered her trainer the thrill of a Flemington win at the first attempt with an all-the-way success in the Listed Bob Hoysted Stakes.

Trained in WA by 29-year-old Tiarrna Robertson, Fabergino showed her rivals a clean set of heels in Saturday’s 1000m straight race to win by 1-1/4 lengths under Jordan Childs.

The win was the five-year-old mare’s eighth from 11 starts, with the Melbourne mission designed to test the waters for a bigger sprint target later this year.

“Just to get a runner here is amazing but to come over and get a winner is just an absolute thrill, for the stable and all the connections,” Robertson said.

While the horse and trainer made the trip from WA for the Bob Hoysted, a group of the sprinter’s part-owners travelled from England to cheer the mare on at Flemington.

Robertson said Fabergino was scheduled to return home on Tuesday as she races best when fresh and given only one run each campaign with let-ups in between.

“She’s a free-rolling horse who has always jumped and led. But to see her do it here at racing headquarters was just amazing,” Robertson said.

“It’s hard to measure them up until she has competed against them but she’s beaten what she had to at home and we came here thinking hopefully we had the right horse. And she measured up today.

“Now that we know we can bring her over here and be competitive hopefully we might be able to try something a bit harder next time.”

Saturday’s victory was Fabergino’s third straight Listed race win after taking out the RS Craford Stakes (1000m) at Ascot in October and the Summer Scorcher at the same Perth track on January 4.