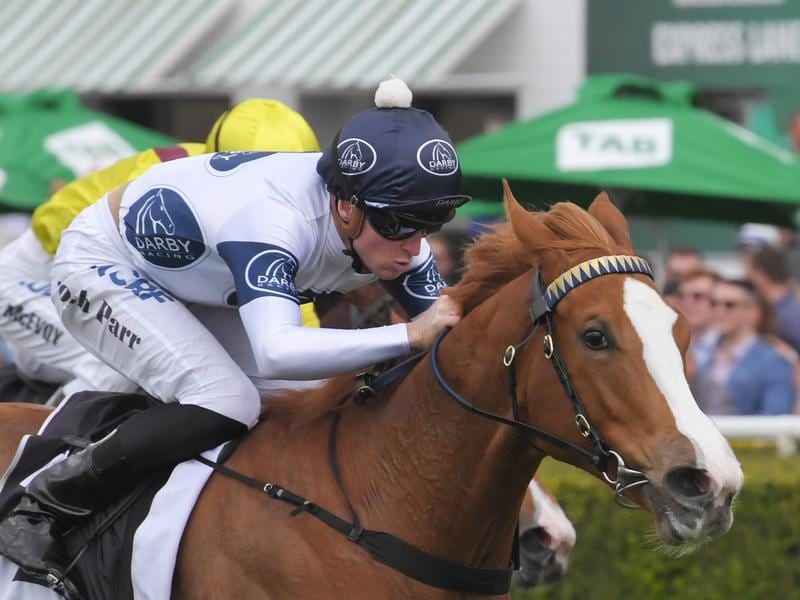 Gimcrack Stakes winner Every Rose lines up in the Group Two Silver Slipper against Cellsabeel.

After making her mark as the first Sydney two-year-old winner of the season, Every Rose has not had things her own way since.

The filly dominated the Gimcrack Stakes in October but has run two seconds and been unplaced in the Magic Millions Classic at her other three starts.

After her ninth in the $2 million Magic Millions at the Gold Coast last month, her trainer Mark Newnham has regrouped and has her back on track for Saturday’s Group Two Silver Slipper (1100m) at Rosehill.

A major lead-up to the $3.5 million Golden Slipper on March 29, the race has attracted 13 entries headed by Cellsabeel.

The Ciaron Maher and David Eustace-trained filly is the ruling Golden Slipper favourite but sits at No.16 with several qualifying races coming up.

Newnham said Every Rose, who is No.10 on the latest order of entry, had pleased him with her winning barrier trial last week.

“She had no luck when she needed it at the Gold Coast,” Newnham said.

“She had two solid runs leading into the Magic Millions and may need two going to the Slipper.

“We’ll see how she gets through Saturday.”

Every Rose got a long way back in the Magic Millions won by the Maher/Eustace-trained Away Game who runs in Saturday’s Group One Blue Diamond Stakes at Caulfield.

Rosehill was in the heavy range on Monday but is expected to improve with fine weather in Sydney late in the week.

“Even if it was still wet, she won the Gimcrack on soft so we know she can be effective either way,” Newnham said.

Rachel King will ride Every Rose on Saturday because the 54.5kg she carries is under Josh Parr’s riding weight.

Parr will be back on stablemate Shadow Hero when he takes on a crack field in the Group Two Hobartville Stakes (1400m).

The 16 entries include Cox Plate runner-up Castelvecchio and Warning, winner of the Victoria Derby in which Shadow Hero ran fifth as favourite.

Godolphin’s Savatiano heads the 13 nominations for the third Group Two race on the program, the Millie Fox Stakes (1300m).

Savatiano will be having her first start since taking out the inaugural $1 million The Hunter in October.